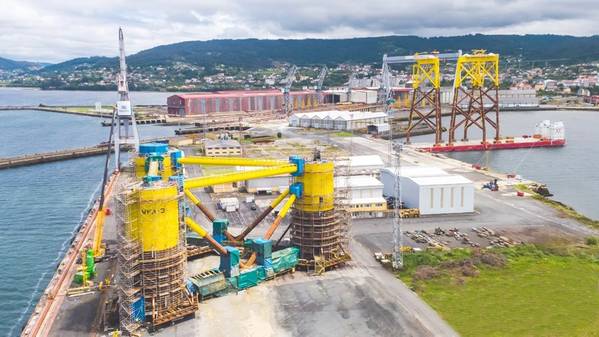 InfraStrata, a UK-based company that will soon be renamed Harland & Wolff, has signed a Memorandum of Understanding (MoU) with Spanish companies Navantia and Windar to target specific fixed and floating wind projects primarily within the UK.

Infrastrata said the collaboration would enable the company's fully-owned shipyards and fabrication facilities, the Harland & Wolff Group, to take better advantage of the offshore wind opportunities set out in the UK Government's Ten Point Plan for a Green Industrial Revolution.

"Harland & Wolff will be able to harness Navantia's extensive experience and adopt their advanced technologies, better positioning itself to be a more attractive and competitive proposition to wind farm developers as it seeks to work with UK companies to develop windfarms off UK shores," the company said.

InfraStrata, which in 2019 bought Harland & Wolff, the Belfast shipyard that built the Titanic, on Tuesday said it had applied to Companies House to trade under the name Harland & Wolff Group Holdings plc. Read more.

The partnership between Navantia and Windar Renovables started in 2015 and since then, they have collaborated in the execution of seven offshore wind projects. Both companies are currently investing in a new XXL monopile facility in Spain.

"As the MoU between the three companies progresses into a formal joint venture, it is expected that the parties will come together to bid and execute on numerous wind farm projects with appropriate work share arrangements between them based on their respective yard capacities and availability, material handling capabilities and quayside load-out capacities. The Harland & Wolff Group has one of the largest fabrication footprints in the UK with circa 256 acres of land at its disposal and load-out areas across its locations that is ideally suited for large offshore wind structures," Infrastrata said.

John Wood, Group CEO of commented: "Through this strategic partnership, we will be able to strengthen the scale and footprint of a combined multi-site offering which will de-risk customer schedules, drive more innovation and efficiency and enable projects to be monetised quicker. We now look forward to working with both organizations as we rapidly advance within the market."

Ricardo Domínguez, Chairman of Navantia said: “The decision to form an alliance between Harland & Wolff and Navantia in the field of offshore wind comes after two years of continuous collaboration on projects in the defense sector, which has enabled the consolidation of a relationship of trust that now extends to other areas of activity of both companies.

"The addition of Harland & Wolff to the Navantia-Windar partnership provides the offshore industry with an industrial surface area of approximately five million square meters and an unprecedented capacity to tackle offshore wind projects, with a special interest in floating solutions that require large spaces for assembly and storage.”

Orlando Alonso, Executive Chairman of Windar Renovables commented: “We are very excited to collaborate with two shipyards with such a long tradition as Harland & Wolff and Navantia, and to contribute to writing a new page in the marine energy sector. Offshore wind is undergoing a process of expansion that will accelerate in the coming years and we want to play a key role in this journey.”