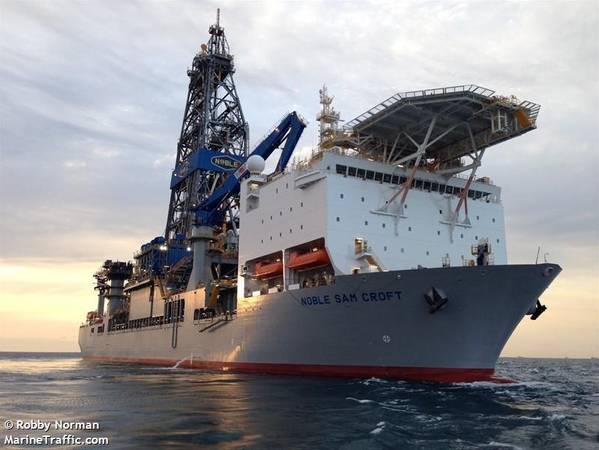 Offshore drilling contractor Noble Corporation has won a six-month contract for its Noble Sam Croft drillship with ExxonMobil in Guyana. Noble shared the news as part of its 2Q results presentation in which it posted a loss of $42 million.

The drilling company, which last week filed for Chapter 11 bankruptcy, said Wednesday ExxonMobil had awarded the Noble Sam Croft drillship a new 6-month contract to drill offshore Guyana, with operations expected to start in the fourth quarter of 2020 after the rig finishes its current program offshore Suriname.

The 2014-built Noble Sam Croft is currently being used by Apache in Suriname where the company last week struck a major oil and gas discovery. MORE HERE.

Noble Corp said that the contract for the Noble Sam Croft drillship with Exxon had been awarded under the previously-announced Commercial Enabling Agreement (CEA) established with ExxonMobil for Guyana earlier this year.

To remind, Noble in February announced four rig deals with ExxonMobil under "a unique commercial enabling agreement [CEA]" for drilling services in the giant Stabroek block off Guyana, where Exxon has discovered more than 8 billion barrels of oil in recent years.

However, Exxon then decided to terminate the one-year contract for the Noble Sam Croft drillship and transferred it to the Noble Don Taylor, keeping the Noble Bob Taylor drilling for Exxon in Guyana till mid-November 2021.

The Noble Sam Croft, which has then stayed with Apache for longer than initially planned (contract now expires mid-November 2020), will now drill for Exxon, after all.

In a statement on Wednesday, Noble said: "With this award, all four of Noble's high-specification HHI drillships will now be contracted to ExxonMobil in Guyana, expanding our relationship with a valued client in one of the world's most exciting deepwater basins and enhancing our footprint in this emerging region."

Norwegian rig brokers Bassoe Offshore have estimated the dayrate for the Noble Sam Croft contract with Exxon to be around $170000.

The other two Noble drillships operated by Exxon off Guyana, the Noble Bob Douglas and the Noble Tom Madden, are drilling and completing Liza Phase 1 and Phase 2 development wells.

Business as Usual Despite Chapter 11 Bankruptcy

As for its voluntary Chapter 11 Bankruptcy aimed at debt restructuring, Noble Crop. said Wednesday  it would significantly deleverage the company's balance sheet.

Noble will continue to operate as usual during the bankruptcy and expects to pay employees and vendors in the normal course of business, it said.

The restructuring support agreement (the "RSA") Noble has entered with two ad hoc groups of the largest holders of the company's outstanding bond calls for all of the Company's bond debt, which is currently over $3.4 billion, to be converted into equity of the reorganized company.

In addition, the company's major bondholders have agreed to invest $200 million of new capital in the form of new second-lien notes.

"The Company expects to emerge from chapter 11 before year-end with a significantly improved balance sheet and liquidity position," the offshore drilling contractor said.

Most difficult environment for drilling in decades

Commenting on the state of the offshore drilling industry, Robert W. Eifler, President and Chief Executive Officer of Noble Corporation, said: "Our industry is dealing with the most difficult environment we have endured in decades.  After several years of low commodity prices that translated to severe reductions in overall rig demand and dayrates, the impact of the COVID-19 pandemic and the OPEC+ supply disruptions has led us to push out further our expectations for a meaningful recovery in demand.

"Despite the very challenging backdrop, Noble has continued to outperform the market in utilization.  We are signing new contracts for our jack-ups in the North Sea and maintain very robust utilization for our floaters in the Gulf of Mexico and Guyana/Suriname basin.  This is a reflection of the high quality of our rig crews and our high specification fleet.

"Looking forward, we will maintain our focus on efficiently managing our business and on strong operational execution.  I am confident that the strength of our operations combined with a solid financial platform post-emergence will position Noble to lead the industry as market conditions improve."