The National Oceanic and Atmospheric Administration (NOAA) Fisheries has started a study of Atlantic cod and other commercial fish in Southern New England to gather data on the potential impact of offshore wind development on the species.

As part of the three-year study, an autonomous underwater glider is surveying areas in and around Cox’s Ledge, including the South Fork wind energy lease area south of Rhode Island and Massachusetts.

"Offshore wind development is rapidly expanding along the Atlantic coast of the United States, especially from Massachusetts to North Carolina. This is a new use of our marine waters, requiring substantial scientific and regulatory review by NOAA Fisheries," it said.

An autonomous underwater glider has begun surveying areas in and around Cox’s Ledge, which includes the South Fork wind energy lease area south of Rhode Island and Massachusetts.

The glider has a hydrophone to detect fish spawning sounds and an acoustic telemetry receiver to detect tagged fish. The receiver will identify location and seasonal occurrence of hotspots for key commercial and federally listed fish species.

According to project lead Sofie Van Parijs, there is little information on Atlantic cod spawning specific to Southern New England waters. Cod elsewhere are known to form large, dense spawning aggregations in predictable locations relatively close to shore, where they can be vulnerable to disturbance that might affect spawning success.

Researchers will tag up to 100 spawning cod with acoustic transmitters that the glider can detect to identify areas where spawning is occurring. Sensors on the glider will also collect detailed environmental data to better understand the temperature preferences and habitat use of Atlantic cod off Southern New England. 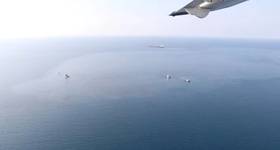