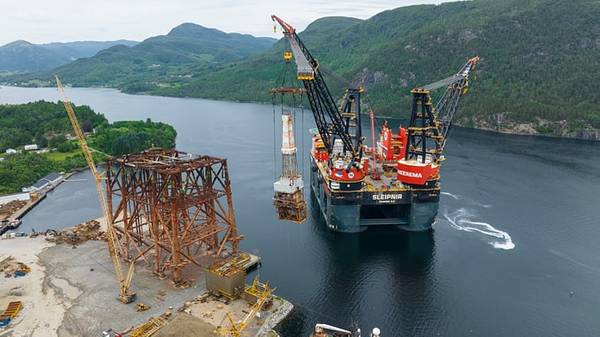 Offloading at the Brae Alpha West AFOD at Environmental Base in Vats, Norway, earlier this year. (photo: TAQA)

Norway's AF Gruppen has been awarded a decommissioning contract from TotalEnergies EP Nederland for the removal and recycling of 10 platforms in the Dutch sector of the North Sea.

The contract includes engineering, preparatory works, removal, transportation, recycling and disposal (EPRD) of the platforms, which have a combined weight of 17,000 tonnes.

The project will start immediately after contract signing and is planned to be completed by the end of 2025. The platforms will be transported to AF Environmental Base Vats for recycling.

TotalEnergies is one of the main gas operators and producers in the Netherlands. It has interests in 22 offshore production licenses, 18 of which we operates, and one offshore exploration license (K1c, 30%).

December last year, a plan by Aker Solutions and AF Gruppen was dropped, despite having been approved by competition authorities.

The two companies had signed a letter of intent in July to merge the offshore decommissioning operations into a 50/50 owned company "with the goal of creating a leading global player for environmentally friendly recycling of offshore assets." However, Aker Solutions said that the final agreement could not be reached.