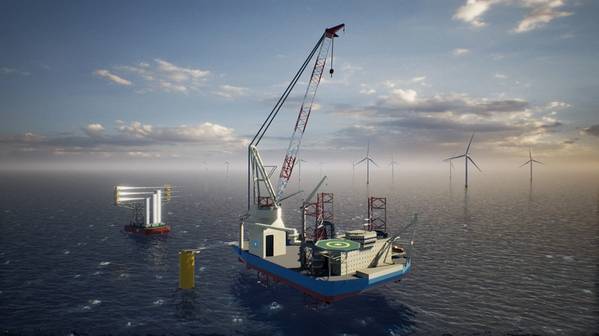 Empire Offshore Wind, a joint venture between Equinor and bp, awarded a contract to Maersk Supply Service for charter of its newbuild wind installation vessel (WIV). This vessel, together with US constructed barges and tugs built and operated by Kirby Offshore Wind, will be used for the installation of the project’s Vestas V236-15MW turbines.

The newbuild offshore wind turbine installation vessel is planned to be ready for operation for Empire Wind I and II in the mid-2020s. Maersk has developed the vessel concept that will deliver the installation of wind turbines by a Jones Act compliant spread.

The Wind Installation Vessel will be built in Singapore by SembCorp Marine, with the steel-cutting ceremony set for Q4 2022. The jacking units, load transfer system and crane will be provided by NOV, and the design work has been supported by class society ABS. Delivery of the vessel into U.S. waters is expected in 2025.

"Empire Wind is a flagship wind development project in the U.S. for New York State and Maersk Supply Service is proud to support Equinor and bp in the the construction of these projects.

“Equinor has worked closely with Maersk for a number of years on the Norwegian Continental Shelf, where we have employed several of their jack-up rigs. Now Equinor and bp are excited to cover new ground together, with the first-of-its-kind wind installation vessel. We will build on all parties’ long history of offshore experience as we extend our collaboration into the renewables business,” says Mette H. Ottøy, chief procurement officer.

Empire Wind 1 and 2, part of the company’s portfolio of offshore wind projects off the US east coast, are key building blocks to accelerate profitable growth in renewables and to deliver on Equinor’s ambition to install 12-16 GW of renewables capacity by 2030, Equinor said.

This is Maersk Supply Service’s first newbuild investment dedicated entirely to the offshore wind industry. With this, the company makes a significant breakthrough in transitioning to becoming a major contractor in offshore wind, an industry expected to grow substantially in the coming decades.

Maersk’s vessel will be supported by two newbuilt tugs and barges, which will transport the wind turbine components from the South Brooklyn Marine Terminal to the Empire Wind lease area, located 15-30 miles southeast of Long Island, New York. The barges and tugs will be constructed and operated by Kirby Offshore Wind, a subsidiary of Kirby Corporation. The concept ensures that the vessel can remain in operation while the barges transport turbine components from the staging port on a continual basis.

Kirby Offshore Wind will provide the Jones Act compliant feeder barges and tugboats which will transport the wind towers and turbines from the South Brooklyn Marine Terminal to the Maersk wind turbine installation vessel.

Kirby will be investing in two new American Bureau of Shipping (“ABS”) classed feeder barge and diesel-electric hybrid tugboat units which will be constructed in U.S. shipyards for a total combined cost of between $80 million to $100 million. Each feeder barge will have the capacity to transport next-generation turbines of 15 megawatt (“MW”) and higher as turbine technology advances. The capital investment for the new vessels will be incurred through progress payments over the 2023 to 2025 timeframe. Kirby’s offshore marine facility in Staten Island, New York, as well as its marine headquarters in Houston, Texas, will be the base of operations for the company’s offshore wind activities.