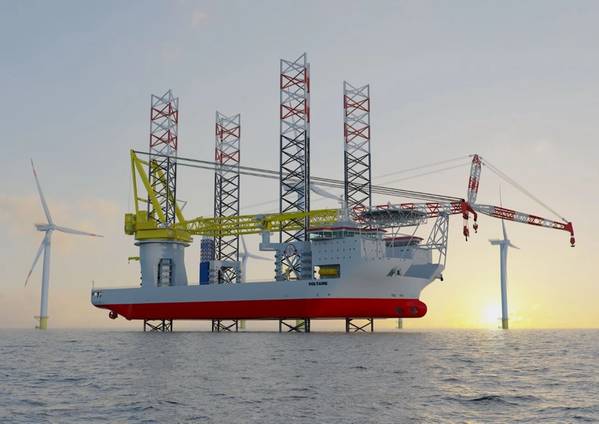 Offshore services company Jan De Nul has signed a final contract to transport and install offshore wind turbines for what will be the world's largest offshore wind farm complex - the 3.6GW Dogger Bank in the UK.

The contract, announced Thursday is for the installation of wind turbines at Dogger Bank A and Dogger Bank B, 130 km off the Yorkshire coast, starting in 2023.

Turbine delivery and installation at the first two phases of Dogger Bank Wind Farm will be the first assignment for the world’s largest Offshore Jack-Up Installation Vessel owned by Jan De Nul Group, the Voltaire. This vessel, currently under construction, will be equipped with a Huisman crane with a lifting capacity of over 3,000 tonnes. The 169.3 meters long rig will enter into service in 2022.

The 3.6GW Dogger Bank Wind Farm, which is being developed in the UK North Sea in three 1.2GW phases, is set to be the world’s largest offshore wind farm when complete and is a joint venture between SSE Renewables and Equinor. It will feature GE's Haliade-X 12 MW, the most powerful offshore wind turbine in the world, with the 220-meter rotor and 107-meter blades

When complete, Dogger Bank will generate enough energy to power over 4.5 million homes every year – around 5% of the UK’s electricity needs.

Dogger Bank A and Dogger Bank B are now moving towards final investment decision, expected by the end of 2020 with FID for Dogger Bank C expected in 2021.

The wind turbines will be installed on monopile foundations. The preferred supplier for foundation fabrication will be announced in 2020.