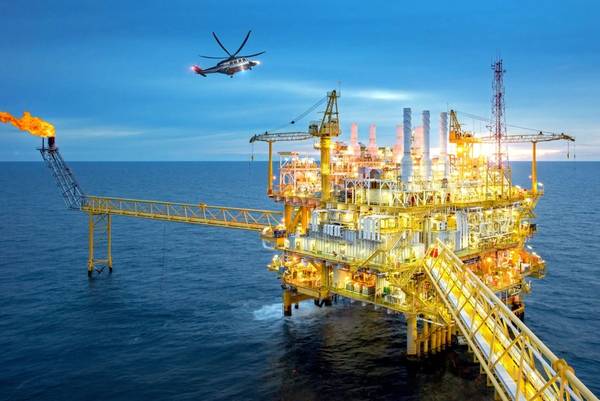 Global oil and gas project sanctioning is set for a monstrous 75% plus drop in 2020 from 2019 levels, as the Covid-19 pandemic has led to massive E&P spending cuts, the energy intelligence company Rystad Energy has estimated.

According to Rystad Energy, the total sanctioning value will end up at around $47 billion, an amount that would be even lower if not for recent developments in Norway and Russia.

Of the total global sanctioning value in 2020, some $27 billion is expected to be for offshore projects, with the remaining $20 billion for onshore.

For comparison, in 2019, the total sanctioning value reached $197 billion, with $109 billion going to offshore projects and $88 billion to onshore projects.

"So far this year, the projects that have been committed are worth a combined $29 billion, with $16 billion going to offshore and the remaining going to onshore. Rystad Energy’s forecast is based on a scenario in which Brent averages around $40 per barrel this year, not far from its current market price," Rystad said in its report.

"At the beginning of this year, the project commitments forecast for 2020 were expected to be comparable to 2019, but the industry downturn thanks to Covid-19 has caused commitments to fall sharply. Going forward, Rystad Energy estimates that sanctioning will not pick up again and recover to 2019 levels anytime soon,” says Karan Satwani, energy service analyst at Rystad Energy.

On a positive note, Rystad said, a month ago total sanctioning was projected even lower than what is now anticipated, as developments in Norway and Russia have given total estimated levels a boost in our July update.

Gazprom awarded contracts for phase one of its Kamennomysskoye-More project at the Sevmash and Zvezdochka yards, both managed by United Shipbuilding Corporation. The contracts are for the construction of the foundation of an ice-resistant platform, with the design job outsourced to engineering player Karoll. Rystad Energy estimates the first phase of the development will cost over $4 billion.

Furthermore, Gazprom and RusGazDobycha have taken a final investment decision on the Semakovskoye field development in onshore Russia. Russian drilling contractor Gazprom Bureniye has been awarded the drilling contract for the first phase of the project, which calls for six development wells. An additional 13 wells are scheduled to be drilled between 2021 and 2022. The project is estimated to cost nearly $1.2 billion.

Meanwhile, the tax relief package announced by the Norwegian government last month has helped oil and gas operators improve project economics in Norway. Spurred by the program, Aker BP commenced development activities on its Hod redevelopment project by awarding Kvaerner a $106 million contract for the topsides and steel substructure of an unmanned wellhead platform, in addition to the subsea pipelines and umbilicals contract to Subsea 7 in a deal valued between $50 million and $150 million. 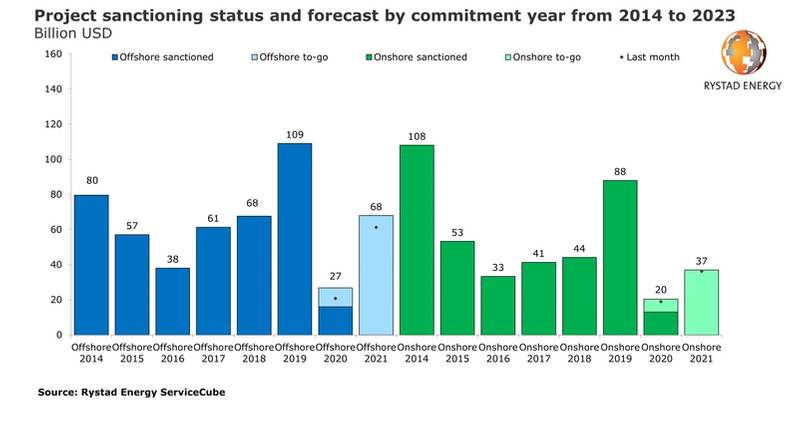 Equinor also signed the letter of intent last month for both the Breidablikk and Askeladd West projects off the coast of Norway. The Breidablikk development, which includes the Grane D and Grane E fields, will be developed as a subsea tieback to the Grane platform and is expected to cost nearly $2 billion. Aker Solutions has been awarded a letter of intent to supply the subsea production system and associated equipment, which includes 15 subsea trees in a deal worth $206 million.

However, the letters of intent for both projects are subject to a final investment decision (FID), which the operator plans to take later this year, Rystad notes.

Lastly, LLOG Exploration has taken a final investment decision for the Taggart deepwater development in the US Gulf of Mexico. The development plan includes tiebacks for two existing wells to the Williams-operated Devils Tower spar.  Williams has reached a tieback agreement with LLOG to provide offshore natural gas and oil gathering and production handling services for the development at the platform. Rystad Energy estimates the development will cost over $300 million.