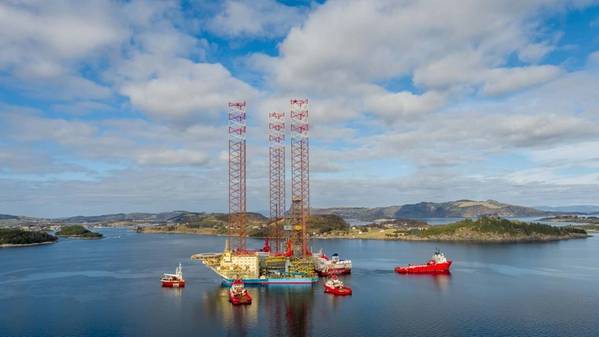 Aker BP has received consent to use the Maersk Invincible jack-up rig to drill a pilot hole on the Hod field, offshore Norway.

The consent for the use of the Maersk Drilling-owned jack-up was granted this week by the Petroleum Safety Authority Norway.

According to the PSA, the main goal for the well is to map the risk of shallow gas/water in the area. The well will be permanently plugged and abandoned after the drilling operation is completed.

Aker BP last month submitted the plan for development and operation (PDO) for Hod to the Ministry of Petroleum and Energy.

The Hod field will be developed with a normally unmanned installation remotely controlled from the Valhall field center, with low CO2 emissions due to power from shore. Five wells with sidetracks will be drilled in order to increase recovery.

Hod is among the first projects to be realized under the temporary changes to the Norwegian petroleum tax system recently introduced.

The original Hod platform was the first unmanned platform on the Norwegian continental shelf when it started production in 1990. The original platform is no longer in service and will be removed after the wells have been permanently plugged. First oil from the new Hod platform – which will be named Hod B – is planned for the first quarter of 2022.