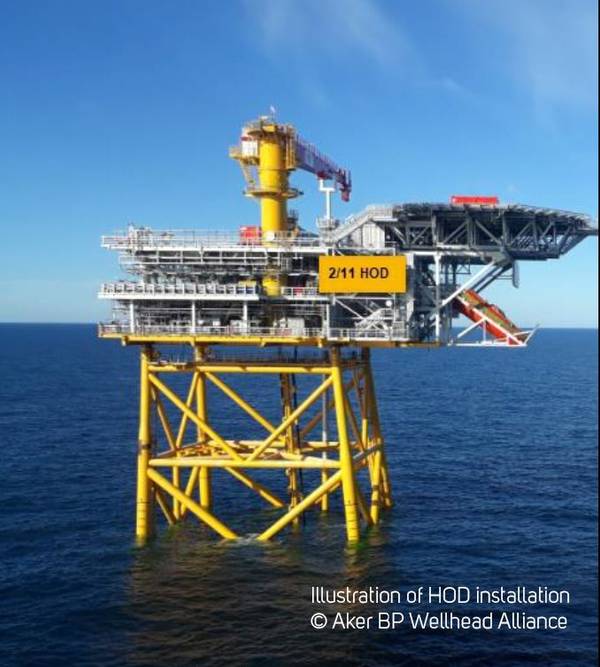 Norwegian oil company Aker BP has ordered the topside and steel substructure from Kvaerner for the normally unmanned wellhead platform at the Hod field. Kvaerner said the deal means that laid-off staff would return to work at its Verdal yard.

This is the second project in the wellhead platform alliance, which was established between Aker BP, Kvaerner, ABB, and Aker Solutions.  The contract has a value of approx. NOK 1 billion (USD 106 million) for Kvaerner.

Karl-Petter Løken, CEO of Kvaerner said: "After a very demanding spring, we are very pleased that we, together with our alliance partners now can commence work on the Hod wellhead platform. Within a short period of time laid-off staff at Kvaerner's yard in Verdal will be back to work.

"In this yard in Central Norway, we have already started deliveries to Equinor for the steel jacket to the latest platform at Johan Sverdrup as part of the phase two development - as well as modules for the floating production ship Johan Castberg. Now the Hod project will give new work next year. As a result, Kvaerner has a good foundation for further improvement and further development of the business," he said.

Kvaerner's delivery to Hod will include design, procurement, fabrication, preparation for sea transport, as well as hook-up and assistance for completion on the field. Prefabrication in Verdal starts today. The steel jacket and topside will be ready for delivery and shipment in summer 2021.

In a separate statement on Tuesday, Aker BP said that the Hod order was supported by the agreement reached this week on temporary tax breaks for the oil and gas industry hit by low oil prices.

Aker BP said:"A broad political majority in Norway has announced an agreement to make temporary changes to the Norwegian petroleum tax system. The changes will strengthen Aker BP's investment capacity and help to unlock new field development projects. This will contribute to higher activity and increased value creation for Aker BP, its suppliers and the Norwegian society at large."

"The Hod development in the Valhall area is the first project to be launched as a direct result of the tax changes. This project benefits from the experience and competence gained from the recently completed development of Valhall Flank West. Aker BP's board has today approved the project and authorized a fast track investment decision to be concluded as soon as possible," it said.

Karl Johnny Hersvik, CEO of Aker BP comments: "The petroleum industry is going through a very challenging time, and we are very pleased to see the rapid and strong response from Norwegian lawmakers. The proposed changes are appropriate and necessary and will strengthen our capacity to invest while at the same time contribute to improved profitability of new field developments. In Aker BP, we will not let this opportunity go to waste. With projects like Hod, we will create significant value both for our owners and for the society at large, and we will contribute to maintaining the capabilities of Norway's world-class supply industry."