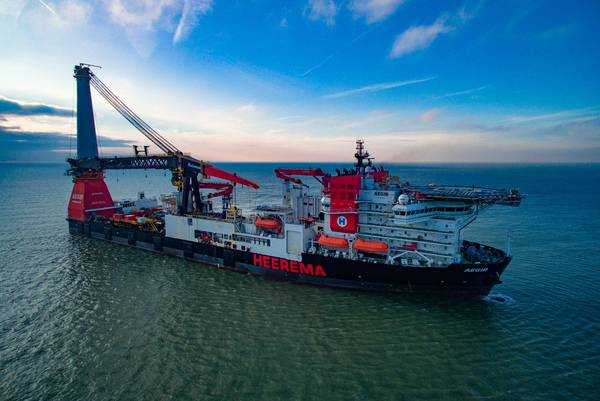 The article has been updated to include a statement by the Heerema Marine Contractors' spokesperson.

Heerema Marine Contractors' heavy lift vessel Aegir has earlier this week experienced a drop fall incident off the coast of Taiwan where it is working on an offshore wind project.

"There were no injuries as a result of the incident, and no environmental impact has occurred. The piling frame and pin pile have only suffered minimal damage," the Dutch company said.

"Work had just started on this project, and currently, foundation installation has been temporarily paused pending investigation. The exact cause of the incident is yet unknown and will be the subject of a thorough investigation," Heerema Marine Contractors said.

The incident with the 2013-built crane vessel happened on Monday, June 15, at 16.42 (local time). Offshore Engineer has reached out to Heerema Marine Contractors seeking more info on the reported incident.

A Heerema Marine Contractors spokesperson eventually responded saying that the vessel was pre-piling jacket foundation piles when the incident happened.

According to the video circulated online apparently showing the incident, the piling hammer fell next to the vessel along with the pile.

The Heerema spokesperson said the hammer "is retrieved from the pile and is back on Aegir’s deck."

While it is yet not clear why the incident happened, a drop fall incident can happen when a pile suddenly drops due to unexpected soil conditions during the pile driving operations.

The Changhua Windfarm Phase 1 project is a project of the Taiwan Power Company (TPC) and executed by a consortium of Jan de Nul and Hitachi.

Worth noting, Aegir will be in Taiwan in 2021 and 2022 as the company last year won a contract to install 111 turbine foundations and two large offshore substations at Ørsted's 900MW Greater Changhua 1 and 2a offshore wind farms.

A video apparently showing the incident has appeared on social media. The incident seems to have occurred during the pile driving work on one of the pin piles designed to support offshore wind jackets when the pile and the hammer snapped off the crane cable hook. See the video here.