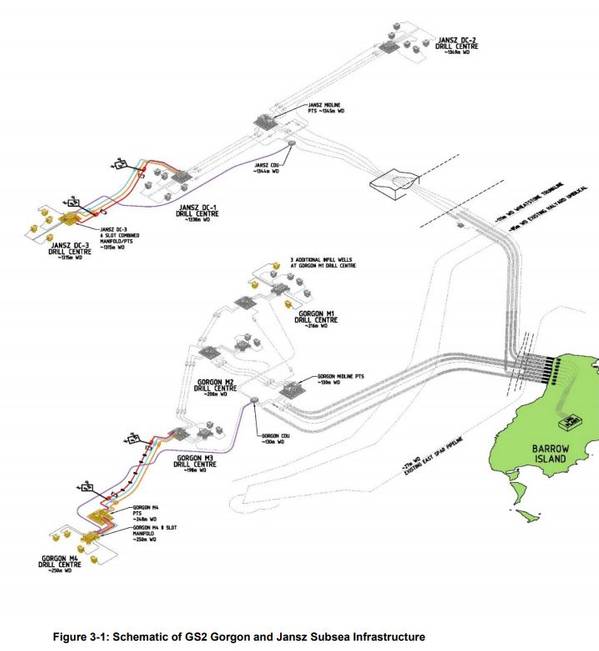 Chevron has filed an environment plant to Australian regulators related to the expansion of the subsea gathering network within the existing Gorgon and Jansz–Io offshore gas fields in Australia.

Chevron Australia is the operator of the giant Gorgon project, which included the construction of an LNG Plant and domestic gas plant on Barrow Island.

To maintain gas supply for the three-train Gorgon LNG Plant, Chevron plans to expand the subsea gathering network within the existing Gorgon and Jansz–Io fields. This involves a drilling campaign, installing additional subsea manifolds to accommodate the new wells, and infield flowlines to tie into the existing subsea infrastructure.

The Jansz–Io gas fields are located within production licenses WA‐36‐L, WA‐39‐L and WA‐40‐L approximately 200 km off the north‐west coast of Western Australia in water depths of approximately 1,350 m.

The Gorgon gas field is located within production Licences WA‐37‐L and WA‐38‐L, approximately 130 km off the north‐west coast of Western Australia, and 65 km north‐west of Barrow Island in water depths of approximately 200 meters.

Included in the project are leak testing and pre-commissioning, field suspension, inspection, maintenance, and repair (IMR) (before start-up and operations start), support operations.

Installation of pipelines, flowlines, and subsea infrastructure is expected to start in Q4 2020, at the earliest, and be completed within approximately 24 months. Construction activities will begin with site preparation and pipelay, followed by structure, spool, and jumper installation.