Tullow and Partners Plot Next Steps in Guyana 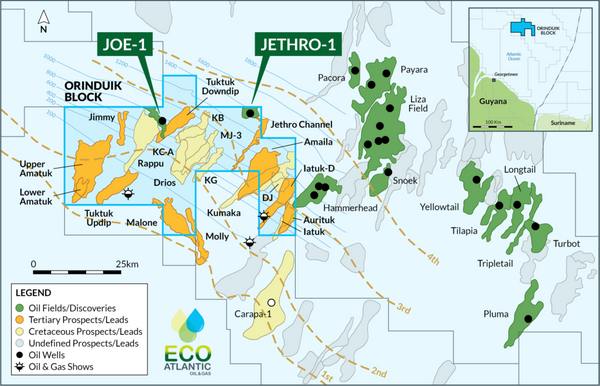 Tullow Oil and its partners in the Orinduik block offshore Guyana are plotting their next steps following two discoveries on the closely watched hotspot earlier this year.

The London-based operator, which owns 60% working interest in the 1,776-square-kilometer Orinduik block, is working with partners Total (25%) and Eco Atlantic (15%) to analyze data from both the Jethro and Joe discoveries while researching future well target selection and associated costs for wells being considered for a 2020 drilling program, Eco Atlantic said in an operational update on Thursday.

Tullow, which also owns a 37.5% interest in the Repsol-operated Kanuku block, has said it expects a result from the Cretaceous Carapa prospect, currently being drilled just south of the Orinduik block, in the fourth quarter of 2019.

Looking ahead, Tullow CEO Paul McDade has said the company plans to drill at least three or more exploration wells in Guyana in 2020.

In August, Tullow announced its first oil discovery in Guyana, with the Jethro-1 well on the Orinduik block. The well encountered 55 meters of net oil pay in high quality oil bearing sandstone reservoir in the Lower Tertiary play.

Eco said its evaluation of the well data to date on Jethro-1 has confirmed that the sands intersected were as had been anticipated.

Colin Kinley, Eco co‐founder and COO, said, “Our Jethro‐Lobe discovery, announced in August 2019, is in a clean Lower Tertiary amalgamated sandstone. Tullow described the Jethro-1 well, upon discovery, as having the potential to be a standalone commercial discovery, having a clear seismic definition and excellent reservoir. The JV Partners are currently evaluating the requirements for an appraisal well.”

The next discovery, Joe-1, in the Upper Tertiary play, is viewed as a new play opener for the overall Guyana basin. This second discovery on the Orinduik block de-risks the petroleum system of the Western area of the Orinduik block, where a significant number of Tertiary and Cretaceous age prospects have been identified, Tullow said.

Interpretation of the data from the second find, the Joe-1 discovery, is ongoing, Eco said. There is the potential for more resource than previously anticipated, and the reservoir and proven oil charge in the Upper Tertiary sands on Joe‐1 provides encouragement in relation to many other Upper Tertiary age locations throughout the Orinduik block, it added.

Kinley said, “The Joe‐1 discovery on the Orinduik block, announced in September 2019, is in a shallow, clean, Upper Tertiary age channel sandstone. Not only have we opened a new shallow play, furthering and de-risking other opportunities on the block, we have also done this cost effectively.”

Eco said both wells were drilled on budget. Joe delivered for less than $21 million gross, less than half of the cost of the Jethro well.

“We believe that these lower drilling costs positively affect development economics in this play,” Kinley said.

“As was the case with the Jethro‐Lobe well, we were able to clearly define the target on the 3D seismic section of Joe‐1, and the well results were in line with our pre-drill expectations. The reservoir and the proven oil charge in the Upper Tertiary sands in Joe-1 also provides encouragement in relation to many other Upper Tertiary locations throughout the Orinduik block, for example the nearby off‐setting Jimmy prospect where Eco believes we now have a significant increase in the chance of success as it appears to be in the same charged sands.

“With further processing and interpretation of 3D seismic data, now correlated with our two well discoveries, the location of further wells to be drilled in 2020 will be defined within the next few months.

“In addition to geological and geophysical interpretation work, Eco and its JV partners have now begun operational budget planning to secure commercially attractive proposals for the timely provision of materials and services required to allow for our drilling program in 2020.”

Tullow is preparing a budget for long lead items including wellheads and casing, ECO said.

Gil Holzman, Eco co-founder and CEO, said, “After great success in our 2019 drilling campaign, with two significant oil discoveries, the JV partners on the Orinduik block have many additional targets to consider in the near term. The newly learned results on Orinduik and the results from the Carapa well currently being drilled in shallow water on Repsol’s adjacent Kanuku block, just south of the Orinduik, will greatly assist in our interpretation and selection of future drilling targets.

We are pleased to support the further work in 2019 and look forward to approving the 2020 drilling program and budget once finalized. We are sufficiently capitalized for drilling further wells in the 2020 program.

“With ample de-risked prospects and targets on the highly prospective Orinduik bock, Eco is well positioned to continue to generate material shareholder value.”