The two converted FPSO units will be located on the Kaombo project, in Block 32, in 1650m water depths. The Kaombo development scheme includes 59 subsea wells, connected through around 300km of subsea lines, to two FPSO units, each with a production capacity of 125,000 bbl/d.

“With an extensive track record in turret mooring systems already, this project is a great opportunity for Bluewater to strengthen its position as one of the few worldwide specialists and suppliers of large complex Turret Mooring System,” says Hugo J. Heerema, President and CEO of Bluewater Energy Services.”

US$16 billion Kaombo gets go-ahead 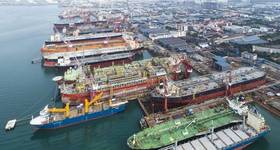