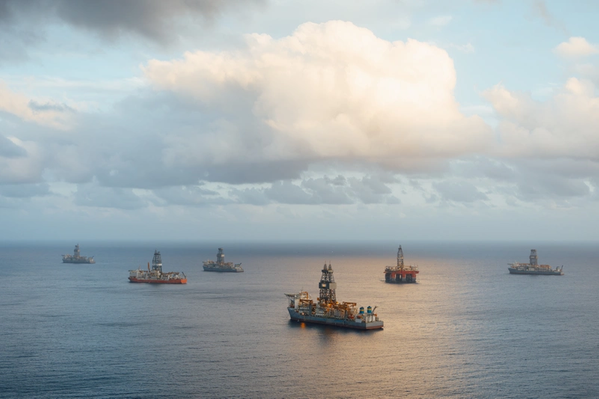 Rental rates for offshore oil and gas rigs have rocketed higher, boosted by a race to lift production because of the war in Ukraine and a recovery in demand after the COVID-19 pandemic.

Drilling companies are in a stronger position to demand higher dayrates for their equipment after several lean years that led to a wave of mergers and pushed them to scrap older rigs, leaving fewer available now that demand is rebounding.

Daily costs to hire a rig, known as the dayrate, have risen fastest for deepwater equipment in the "Golden Triangle" from the U.S. Gulf of Mexico to offshore West Africa and Brazil.

Conflict in Ukraine has helped push up demand for rigs as the United States, Europe, and other allies look for alternatives to Russian oil and gas supplies. The European Union aims to end the use of Russian hydrocarbons by 2027.

Offshore specialist Seadrill said in its quarterly report that activity on the Norwegian continental shelf, a vital source of gas for Europe, was expected to rise in 2023, boosted by tax incentives and the "focus on energy security."

For Britain and Norway, the main North Sea producers, the contracted rig count stood at 40 in April, up from 37 at the end of 2020 but below 51 before the pandemic, Esgian data showed.

"Geopolitical tensions have led to energy security becoming a public concern and a priority on a political level," said Pareto Securities analyst Christopher Mo Dege, creating "a willingness to invest in offshore fields".

More than a quarter of the world's total oil production came from offshore fields in 2021, Rystad Energy data showed.

Valaris, the world's largest offshore driller by fleet size, said in April it had won a contract with an international oil major with dayrates "not seen in the past seven years for drillship work offshore West Africa".

Even before the Ukraine crisis, oil and gas production had struggled to keep pace with fuel demand as it recovered more rapidly than expected from the COVID-induced downturn.

"Offshore drilling activity is increasing in almost every deepwater geography, with the 'Golden Triangle' being the key driver of demand and dayrate growth," Seadrill said.

It said demand for jack-up rigs used in shallow waters had climbed, particularly in the Middle East, while demand for rigs on the Norwegian continental shelf was expected to rise until the end of 2023 with the increased focus on energy security.

This follows lean years of investment in exploration and production (E&P) after the 2014-2016 oil price dive followed by the 2020 COVID-19 related crash that pushed drillers to restructure, merge and scrap old rigs.

Mergers mean fewer companies and restructuring has put them in better financial shape, giving them more leverage in negotiations.

"Drillers no longer scramble for contracts to improve their liquidity runway. They can take time to negotiate with E&P companies for higher rates, and that's exactly what we are seeing," said Mo Dege at Pareto Securities.

Valaris and Transocean both made acquisitions in 2017 and 2018 to emerge as bigger players, while Borr Drilling bought Paragon Offshore in 2018.