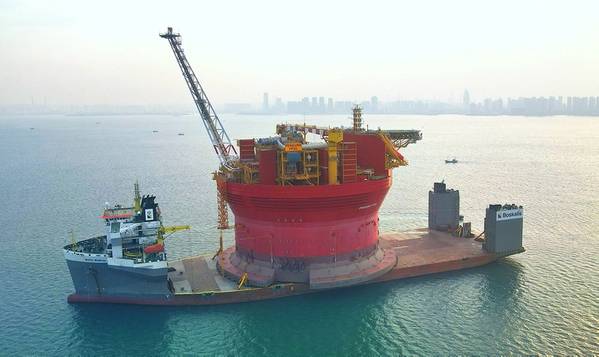 In a social media post on Thursday, Boskalis said: "Boskalis’ semi-submersible transport vessel White Marlin departed from Qingdao, China with an impressive cargo; the 34,000-ton cylinder-shaped Shell Penguins FPSO. After a smooth and safe float-on and [seafastening] campaign, the vessel started her journey to Norway."

At the time of writing, the White Marlin was sailing past the east coast of Taiwan, en route to Singapore, according to MarineTraffic.com information.

The cylindrical FPSO, designed by Sevan Marine, was ordered by Shell from Fluor in 2018.

Following a stop in Norway, the FPSO will then be moved to the area northeast of the Shetland Islands and be used for the Penguins offshore field redevelopment. A Shell spokesperson told Offshore Engineer that the FPSO would stop in Norway for commissioning.

In January 2018, Shell made a decision to redevelop the Penguins field in the northern North Sea, authorizing the start of the FPSO construction.

The company said at the time that the FPSO would have a peak production of around 45,000 boe/d.

Shell said in 2018 that the Penguins redevelopment would see an additional eight wells drilled, which will be tied back to the new FPSO vessel, with a storage capacity of 400000 barrels.

Natural gas will be exported through the tie-in of existing subsea facilities and additional pipeline infrastructure.

The Penguins field is in 165 meters (541 feet) of water, approximately 150 miles northeast of the Shetland Islands. Discovered in 1974, the field was first developed in 2002.

The launch of the FPSO is good news for the Oslo-listed company Magnora, too.

Sevan Marine was famous for the cylindrical rig and FPSO designs it provided for the offshore oil and gas industry.

In a statement this week, Magnora said the remaining payments from the "Penguins" license contract was $16.12 million in total and would be paid over three separate milestones to Magnora ASA.

"We are pleased to announce that the first milestone that occurs upon "Exit Shipyard" has been met and that $7.5 will be paid to Magnora shortly," Magnora said earlier this week.

While receiving cash from what it calls a 'legacy' oil business Magnora is these days focused on the renewables.

Torstein Sanness, Executive Chairman of Magnora ASA said: "We are pleased that this important milestone ("Exit Shipyard") has been reached for our important legacy contract. Furthermore, our new business within renewables have achieved great success within the project development market. So far, Magnora has developed a portfolio of above 3.300 MW of renewable projects across solar, battery storage, wind, and offshore wind in the Nordics, UK and South Africa.

"Our solar project business has already contributed to our business with its first dividend to Magnora in Q3 this year less than 18 months after our first investment. Magnora is actively exploring and developing for a profitable a green, sustainable, low-emission future."

Offshore Engineer has contacted Shell to inquire about the predicted first oil date. A Shell spokesperson said it was too early to say when the first oil might start flowing from the FPSO.