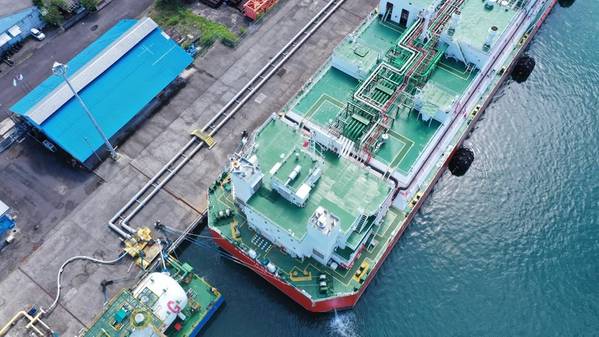 Germany signed a memorandum of understanding (MoU) on Tuesday with the country's top gas importers to safeguard the supply of two floating liquefied natural (LNG) gas terminals it needs to reduce reliance on Russian energy.

Under the MoU with Uniper and EnBW's VNG, the two Floating Storage and Regasification Units (FSRU) in Wilhelmshaven and Brunsbuettel will be fully supplied from their expected operational start this winter until March 2024.

Economy Minister Robert Habeck said this was part of efforts "to make ourselves independent and less susceptible to blackmail from (Russian President Vladimir) Putin, and to give Germany a robust and resilient energy infrastructure, or in this case gas infrastructure."

Using the two FSRU, Germany will be able to receive up to 12.5 billion cubic metres (bcm) of LNG a year, or about 13% of the country's gas demand in 2021, according to numbers from research firm Enerdata.

The Nord Stream 1 (NS1) pipeline, which is majority-owned by Russia's Gazprom, usually supplies 55 bcm a year to Europe but currently runs at just 20% of capacity.

Moscow blames reduced flows on delayed or faulty equipment. Berlin says these are pretexts to hit back at Europe in response to sanctions imposed over Russia's invasion of Ukraine.

"The erratic actions of the Russian president, the pretexts (on NS1) ... I expect that we will again and again have to deal with new challenges," Habeck said.

He said German gas importers had been successful so far in procuring LNG cargoes from the global market for LNG.

Habeck said even though talks were ongoing but importers should be looking for the best deals on the market.

"Companies are well advised, also in the interests of consumers, to not take the most expensive offer and this is exactly what they did," he said.