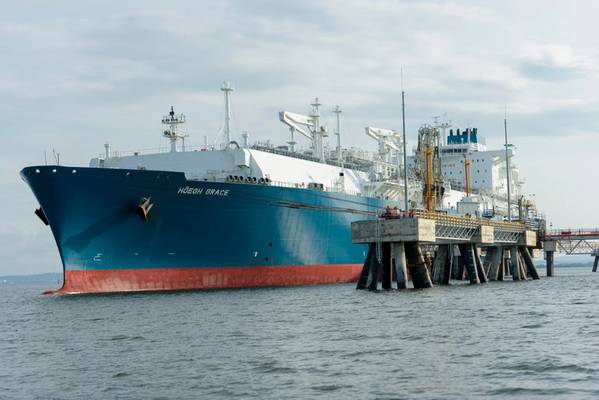 For illustration only - A Höegh LNG FSRU

The German government on Thursday signed agreements for the charters of four floating storage and regasification units (FSRUs), as it works to become less reliant on Russian gas, as FSRUs will enable it to import LNG from other sources.

Höegh LNG said that the detailed FSRU contracts with the German Federal Ministry for Economic Affairs and Climate Action, are scheduled to be completed by September/October, with operations of its FPSO expected to start at the end of this year.

President and CEO of Höegh LNG, Thor Jørgen Guttormsen, said: "We are very pleased and honored to be selected by the German government to support Germany's security of energy supply with two of our modern, large-capacity FSRUs."

Höegh LNG did not share details on the value of the contracts. The company said the FSRUs from its existing fleet would be deployed in Germany.

RWE to operate the FSRUs

In a separate statement, German energy company RWE confirmed it had signed agreements for the charters of the two Hoegh LNG FSRU, adding that these ships offer a rapid interim solution for landing liquefied natural gas (LNG) until the first LNG terminals on the German mainland are completed. RWE will also manage the operation of the vessels.

"Each of the ships is capable of receiving up to 170,000 cubic meters of LNG via tankers in one unloading, converting it to the gaseous state on board and then feeding it into the gas grid. With the two 300-meter-long FSRUs, between 10 and 14 billion cubic meters of natural gas can be made available to the German gas market annually. By comparison, the throughput of a land-based LNG terminal is between 8 and 10 billion cubic meters per year," RWE said.

Andree Stracke, Chairman of the Executive Board of RWE Supply & Trading said: "On behalf of and in the name of the German government, RWE has chartered two special ships with which liquefied gas can be imported and fed directly into the German gas grid. In this way, the company is supporting the German government in strengthening the security of supply in Germany in the short term and in moving away from a one-sided energy dependency as quickly as possible. As early as next year, it will thus be possible to replace part of the Russian gas." 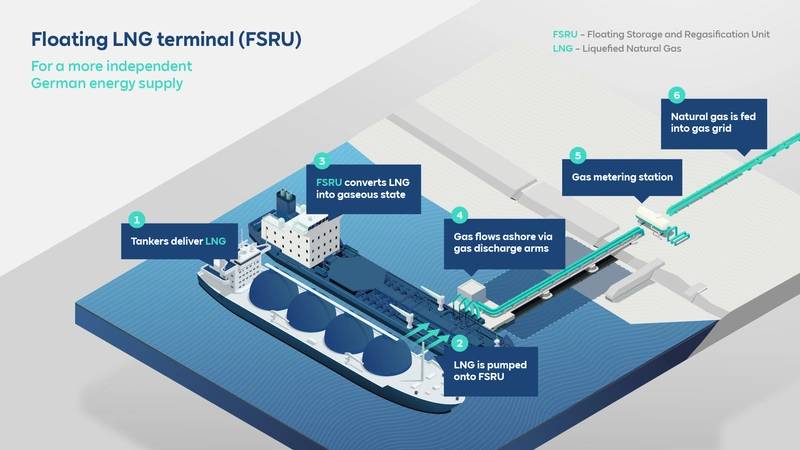 "The plan is for the FSRU platforms to start operating as early as next winter. For the time being, the operational responsibility for the floating facilities lies with RWE, which will make all commercial decisions concerning the use of the ships and optimise these assets in the interest of the German government. RWE will have the technical operation handled by Höegh LNG," RWE said.

Also, for the other two FSRUs, Uniper said that these are the FSRUs Transgas Force and Transgas Power, built in 2021, with a total natural gas-send-out capacity of up to 7.5 bcm/a and an LNG storage capacity of 174,000 m³ each.

"The combined capacity is equivalent to approximately 30% of Russian gas imports into Germany. The FSRUs will commence their service early 2023 with first gas send-out depending on the completion of the onshore installations at the sites selected by the German government," Uniper said.

Uniper CEO, Klaus-Dieter Maubach said: "We are glad and proud to be able to support the German government with our experience in the LNG market in these difficult times. Our site in Wilhelmshaven and the Dynagas’ FSRUs will provide an important cornerstone to achieve a greater diversification of natural gas supplies."

The agreements come a week after Die Welt reported that a floating liquefied natural (LNG) gas terminal will enter operation at the start of 2023 in the German state of Schleswig-Holstein.

According to World Energy Reports, there has been a growing interest in FSRUs recently, especially in Europe, mostly driven due to fear of gas supply interruptions from Russia.

Earlier this week, the kick-off ceremony was held for the realization of Gastrade SA's LNG FSRU facility in Alexandroupolis, Greece. The  5.5 billion c.m. per year Alexandroupolis FSRU, which will supply gas to Southeastern Europe, is expected to become operational by the end of 2023.

According to Uniper, there are 48 FSRUs in operation globally.

"The technology is safe and proven with many years of operational experience. Deployment of FSRUs allows a fast track development of natural gas import facilities. In Europe, similar installations are already in operation in Lithuania, Italy, Croatia and Turkey with several additional locations around Europe currently under preparation," Uniper said.