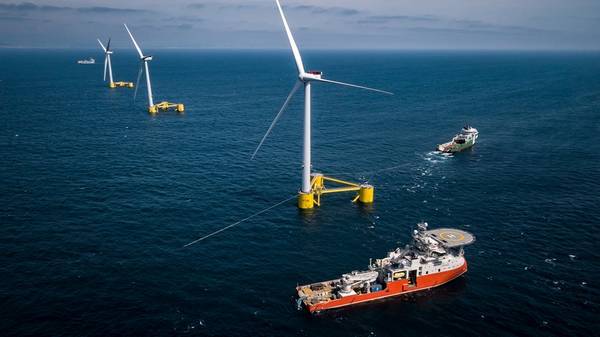 Offshore wind energy developer Ocean Winds and the “Banque des territoires” as shareholders of the Eoliennes flottantes du golfe du Lion (EFGL) project, have reached the Final Investment Decision, committing to the construction of a floating wind project in France.

"This major step will allow the signing of contracts with the main industrial and financial partners and the launch of the project's actual implementation phase," Ocean Winds, jointly owned by EDP Renewables (EDPR) and ENGIE (50:50) said.

The EFGL pilot project involves the construction and operation of three 10 MW floating wind turbines, more than 16 km offshore from Leucate (Aude) and Le Barcarès (Pyrénées-Orientales). By capturing the regular and sustained offshore winds, the turbines, the most powerful ever installed on a floating platform, will cover the annual electricity needs of more than 50,000 coastal residents. The wind farm farm is scheduled to be commissioned at the end of 2023 and will operate for 20 years.

“Thanks to the high-level teams working on the project, this FID marks a step closer to the construction of a pilot that will serve as a technological reference for the entire floating wind energy sector”, said Grzegorz Gorski, COO Ocean Winds.

"As the third generation of the Principle Power Inc. floater technology - after WindFloat Atlantic (2MW) starting operation ten years ago and WindFloat Atlantic (25MW) from two years ago – the design of the EFGL floater holds significant improvements and new solutions. With such a long operational experience, it is now the most advanced floater technology and is ready for a full-scale commercial deployment.”

Gorski added: “Ocean Winds with PPI technology is now the only continuation of the French pilot program projects bidding in Bretagne Sud tender. The other technologies awarded are either discontinued or the awarded developers changed their bets.”