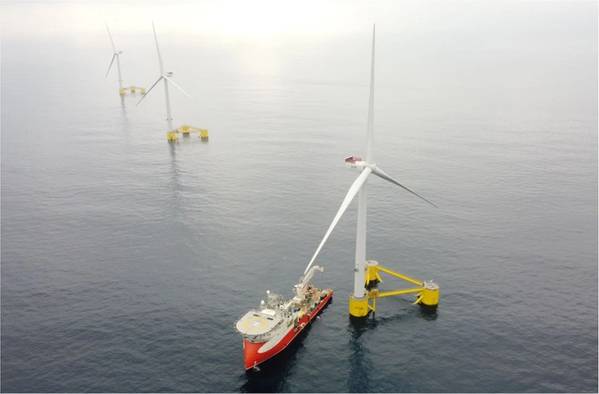 The 25MW wind farm, consisting of three wind turbines standing tall on Principle Power's semi-submersible foundation, is now supplying the Portuguese electrical grid with the energy generated by its 8.4 MW wind turbines, the world's largest turbines ever installed on a floating platform.

The third and final turbine was recently towed to the offshore location, and according to Principle Power, the turbine has now been connected to the substation. The turbines were supplied by MHI Vestas.

"Following the connection of the last of the three platforms to the 20 km export cable connecting the wind farm to the substation at Viana do Castelo, Portugal, the construction of the wind farm is now complete," Principle Power said.

"The commissioning of this floating wind farm is a landmark achievement for the sector as floating wind technology contributes to the diversification of energy sources, provides access to untapped marine areas and represents a major technological leap towards a carbon-free economy," Principle Power added.

With a total installed capacity of 25 MW, WindFloat Atlantic is the world’s first semi-submersible floating wind farm, and will generate enough energy to supply the equivalent of 60,000 users per year, saving almost 1.1 million tons of CO2, Principle Power added.

"This project's success is rooted in its technology. Its mooring technology, for example, allows for installation in waters over 100 m deep, and its design offers stability in adverse weather and sea conditions. Another key advantage was the assembly technology used: dry-dock assembly provided significant logistical and financial savings, and the platforms were towed using standard tug boats," Principle Power said.

"These technical advantages, among others, clearly show that Windfloat Atlantic's model is replicable in other areas where adverse seabed conditions or significant water depth mean that traditional bottom-fixed offshore wind technology is not an option," the company said.

According to Offshore Wind Power report recently released by World Energy Reports, by the end of 2020, ~87MW of floating offshore wind farm capacity will be installed or 0.003% of total global offshore installed wind capacity.

By the end of 2021, based on projects currently under construction, this capacity should have grown to 159MW.

"This reflects that technology remains relatively immature and not yet ready for utility-scale (>200MW) plants, at least in the short-term," the report says.

However, the report says that drivers are present that indicate floating offshore is set to grow to be a larger segment than shallow water / grounded-fixed production solutions, and that some 79% of global offshore wind technical capacity is in deeper water requiring floating foundations, generally further offshore where the wind resource is a higher quality that supports higher capacity factors than other technologies. 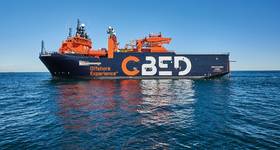