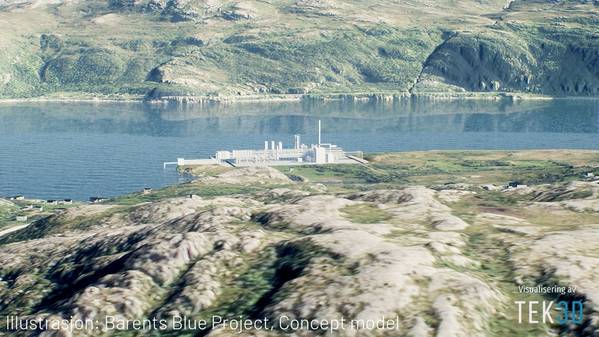 Bjørgulf Haukelidsæter Eidesen, CEO of Horisont Energi said: "This agreement means that we are now moving forward in the Barents Blue project with two industrial partners with a strong local presence. They have a long-term perspective and bring extensive experience with large and complex technical projects. This is a major step forward for Barents Blue."

The Barents Blue project is based on using natural gas to produce ammonia, a key industrial gas used globally in the fertilizer and chemical sector, and a very efficient hydrogen carrier, making it one of the most promising fuels for the decarbonization of parts of the maritime sector.

Equinor and Vår Energi have been dubbed the two largest offshore oil and gas producers in the Barents Sea region, which are supposed to be among the natural gas suppliers to the Barents Blue ammonia plant.

Vår Energi is the operator of the Goliat and Alke licenses in the Barents Sea. Goliat is mainly an oil field, but also holds natural gas currently being reinjected into the reservoir. Total recoverable resources in Alke and Goliat amount to about 25 billion standard cubic meters of gas.

Bjørn Thore Ribesen, VP Field Development and Projects in Vår Energi said: "Vår Energi has explored various alternatives for producing gas resources from these licenses. The potential for an ammonia plant has been included in our studies over the past year. This agreement strengthens our ambitions for a gas evacuation solution in the region.

During the production process in the Barents Blue ammonia plant, more than 99 percent of the CO2 in the process gas will be captured and permanently stored in the offshore Polaris reservoir below the seabed offshore Finnmark. The Polaris reservoir may have a storage capacity in excess of 100 million tons, which is equivalent to twice Norway’s annual greenhouse gas emissions.

"The Barents Blue ammonia plant is planned to consist of three process trains which may be developed simultaneously or sequentially including all required utilities for producing blue ammonia. Each train calls for a facility producing approximately 1 million tons of pure ammonia per year, potentially permanently storing 2 million tons of CO2 annually, making Barents Blue one of Norway's largest environmental projects," says Eidesen.

In a statement on Wednesday, Honeywell announced it had signed a license agreement with Horisont Energi for Honeywell’s UniSim Design process modeling software to verify and optimize the design of its carbon-free ammonia plants.

UniSim Design will help Horisont Energi perform technical evaluations of its plant designs aimed at efficiently and cost-effectively capturing emissions through steady-state and dynamic modeling. Honeywell said it would work with OLI Systems to integrate its electrolyte simulation technology that is intended to help overcome chemistry-related challenges to enhance sustainability, operational efficiency, and asset reliability in industrial applications.

“We are pleased to have selected Honeywell’s and OLI Systems’ software to aid our development of the world’s first large-scale production facility for clean ammonia, one of the world’s most important industrial gases,” said Eidesen.

"Our clean energy solutions, supported by the UniSim Design process simulation technology from Honeywell and OLI’s electrolyte modeling package, will help decarbonize a number of industrial processes in line with emerging regulations.”