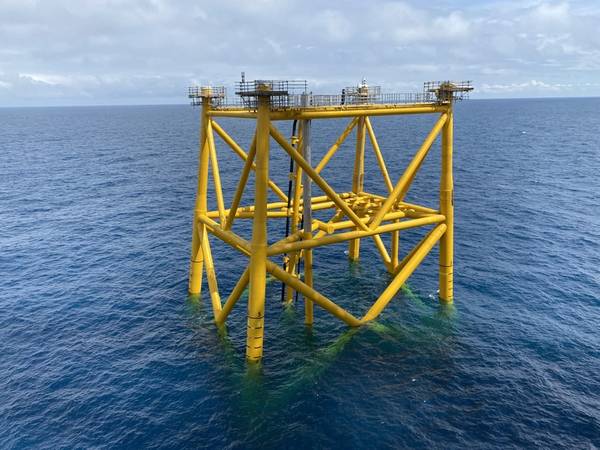 "The Hod B jacket is now safely installed and ready to receive the topsides later this summer. The installation was accomplished just one year after the first steel was cut in the project," Aker BP said this week.

The Hod field will be developed with a normally unmanned installation which will be remotely operated from Valhall.

CO2 emissions from the field will be very low as a result of power from shore, the company said.

"The first steel for the platform was cut by Aker BP CEO Karl Johnny Hersvik at the Aker Solutions yard in Verdal on 9 June 2020. This occurred mere hours after the Parliament adopted temporary changes in the petroleum tax regime," Aker BP added.

“I remember the day as an enormous relief. The preceding months were marred by disappointments and bad news. Oil prices were low, uncertainty was high, and we’d spent the last few months cutting costs and investments. Along with our alliance partners, we were able respond quickly and get the Hod project back on track. It’s absolutely fantastic that the jacket is in place on the field now, just one year later. Congratulations to everyone involved!” says Karl Johnny Hersvik.

The Hod B platform is being delivered by the fixed facilities alliance between Aker BP, Aker Solutions and ABB.  Both the jacket and topsides are being built at Aker Solutions in Verdal, and the work has secured a number of jobs at the yard, Aker BP said.

The first normally unmanned platform delivered by the platform alliance was Valhall Flank West. Hod B is a copy.

“We now see that we work even faster and even more efficiently together on Hod compared to the Valhall Flank West project. This shows that the alliance model works. It’s also why this model is an important part of Aker BP’s strategy and the key to delivering profitable projects in a challenging market moving forward,” says SVP Projects Knut Sandvik in Aker BP.

Overall, Aker BP is planning to invest about 135 billion kroner in field development projects on the Norwegian shelf leading up to 2028. This will add more than 500 million barrels to Aker BP’s resource base, and more importantly – it will bring robust activity and a considerable number of jobs for several suppliers across the country.

“We currently have Hod B and three other projects in the execution phase. Nine projects are in early phase and working toward submitting plans for development and operation by the end of 2022,” Sandvik says.

The Hod field is operated by Aker BP, which owns 90 percent. Pandion Energy is the partner with a 10 percent ownership interest.

The Hod B platform topside is scheduled to sail from the Verdal yard in August. At the same time work is underway to plan the remaining activities to complete the project. Multiple subsea campaigns will be conducted to install and connect the gas lift pipe, production flowline and umbilical. Integration work is underway on Valhall and the Maersk Invincible drilling rig will start drilling production wells this autumn.

"Hod B is expected to contribute 40 million barrels of oil equivalent and will be important for Valhall to reach the ambition of a total of two billion produced barrels from the area. Production is scheduled to start in the first quarter of 2022," Aker BP said.

“Projects like Hod B allow us to create considerable values both for us, our partners, alliance partners, owners, as well as the Norwegian society. We’re also contributing to maintain a world-leading supplier industry. This is an industry with expertise that is fundamental in the energy transition,” Karl Johnny Hersvik concludes.