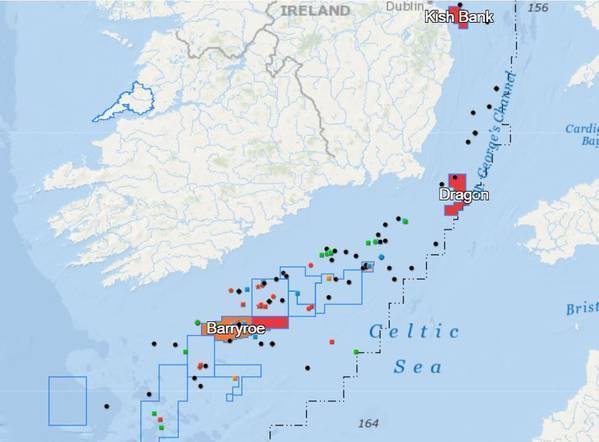 Ireland-based oil and gas firm Providence Resources has terminated the farm-out agreement with SpotOn Energy for the offshore block in Ireland containing the Barryroe oil and gas discovery.

Providence, with its partner Lansdowne, had in November 2020 agreed to farm out a 50% working interest in SEL 1/11 offshore license containing the Barryroe field to the Norwegian firm SpotOn, months after it started the farm-out talks.

Barryroe, located around 50 km off the south coast of Ireland in shallow water (around 100 meters water-depth) has been dubbed one of the largest undeveloped oil and gas discoveries offshore Europe.

Under the agreement signed last year, SpotOn was to become the operator of the block, and was expected, with its consortium of leading oilfield services providers including Schlumberger, Maersk Drilling, Keppel FELS and Aker Solutions, Aibel, and AGR, to fund a 100% of the early development program costs and the full field development.

However, Providence said Thursday it had terminated the farm-out deal with SpotOn because "key financing conditions were not met."

"Building from the many positive elements of the SpotOn project development and financing model, the Barryroe partners are pursuing a similar development approach, including payment deferrals by individual service providers on equivalent or better terms and a Nordic bond issue. This revised approach will enable Providence to participate in a much greater share of the value of the Barryroe asset than was proposed under the SpotOn structure," Providence said.

"Work to progress the funding solution is well advanced and is expected to be concluded before the end of the third quarter, in time to progress a 2022 drilling program," the company added.

"To maintain development pace and demonstrate their continuing and material support for the project, Pageant Holdings, a substantial shareholder, has made an offer to underwrite a capital raise for US$2.5m at 3p per share. The offer includes a one for one warrant which would potentially raise a similar amount," Providence said. The Pageant Offer remains open until June 30, 2021.

According to Providence, the Barryroe early development scheme has the potential to deliver "exceptional value" for Providence.

"Internal modeling forecasts a project NPV (10) valuation of $560m to Providence at US$60 per barrel based upon recovering 48m barrels of oil, equivalent to c. 16% of the estimated recoverable resource within the SEL 1/11 Barryroe license area," the company said.

Providence CEO Alan Linn commented: “Having actively supported SpotOn over the past year it is disappointing that it’s become necessary to terminate the farm-out process with them. However, we are looking forward and actively building a revised development partnership with key service providers and a financing package designed to meet the needs of the project.

"We have been encouraged by the support we are receiving from service providers and banks and the commitments being offered to work with us in progressing the project. We are currently working with key service providers to structure direct long-term partnerships on a risk/ reward basis and we are also in discussions with brokers to raise a Nordic bond. The interim funding offer from Pageant Holdings is very welcome and a confirmation of their continuing support for the value potential of the development."

The Barryroe early development scheme is an attractive investment which offers excellent returns, even in a low oil price environment. We look forward to completing the funding process and appreciate the support and patience of shareholders. The early development scheme will be of considerable benefit to the local economy and contribute to Ireland’s energy security as we move towards a low carbon economy.”

A Pageant Holdings spokesperson said:"We remain committed to the development of the Barryroe field and bringing this extremely attractive project into production. Bringing the project development in house with the resulting enhanced equity returns for shareholders has our full support. With the calibre of the service groups engaged in the project, coupled with strong capital markets, we believe this attractive asset will finally be developed.”

Providence has an existing government approval to undertake an offshore site survey at the K- site location, and this work is scheduled to be completed before the end of 2021, ahead of a planned drilling program during 2H 2022. The drilling program will require an environmental impact assessment report to be completed as well as various regulatory approvals before the commencement of operations.

In April 2019 the Barryroe Partners submitted an application for a Lease Undertaking to the Irish authorities. This has been updated to reflect the latest work program which is designed to progress granting of a Petroleum Lease and early production from the eastern part of the Barryroe Field, subject to government approvals.

"Subject to a successful completion of the various technical workflows and funding plus various government approvals, the Barryroe partners remain confident that the overall project schedule will be achieved," Providence said.

The early development scheme includes three production wells with horizontal completions into the A-sand reservoir; One water injection well into the A-sand reservoir; Subsea production trees with manifold and umbilicals tied back to a leased FPSO. Processing capability will include oil processing/water and gas injection/power generation and flow assurance facilities.

The Early Oil Development Scheme is based upon the economic recovery of approximately 48 million barrels of oil or 16% of the independently assessed 2C resources within the SEL 1/11 license area.