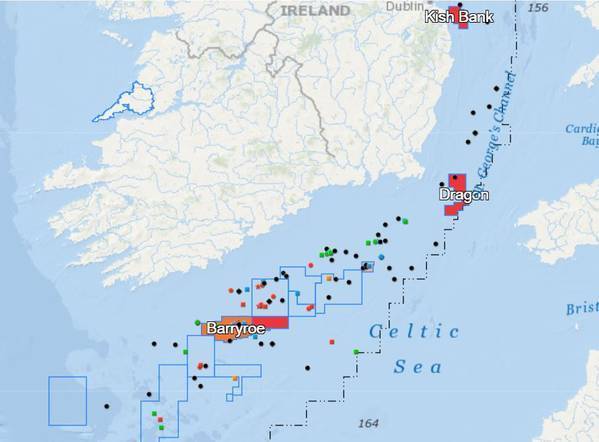 Ireland-based oil and gas company Providence Resources has signed a farm-out deal with SpotOn Energy for the offshore block in Ireland containing the Barryroe oil and gas discovery.

Providence Resources, together with its partner Lansdowne Oil & Gas agreed to farm out a 50% working interest in SEL 1/11 offshore license containing the Barryroe field to the Norwegian firm SpotOn, months after it started the farm-out talks.

SpotOn, which will become the operator of the block, will, with its consortium of leading oilfield services providers, fund a 100% of the early development program costs and the full field development.

According to Providence, Barryroe, located around 50 km off the south coast of Ireland in shallow water (around 100 meters water-depth) is one of the largest undeveloped oil and gas discoveries offshore Europe.

Following the farm-out, SpotOn will own a 50 percent stake, Providence (via its subsidiary Exola) will retain 40% and Lansdowne will retain a 10% stake.

The agreement also includes SpotOn providing a $5 million non-recourse loan to Providence to fund EXOLA in the preparatory and permitting works required to progress the EDP Work Programme for the Barryroe oil and gas field.

SpotOn will also provide finance, by way of non-recourse loan facilities, for the remaining 50% of agreed cost obligations attributable to Lansdowne & EXOLA in respect of the EDP Work Programme and the Full Field Development. The company will be entitled 80% of the net production cashflow from the offshore block until the debt is repaid, after which it will be entitled to 50% of the net production cashflow

The farm-in is conditional upon SpotOn confirming that a minimum of US$ 166 million in funding (the Agreed Funding), for the Early Development Programme (EDP) is in place and that Irish government approval for the Farmout agreement has been received.

The Early Development Programme is focused upon the delivery of production from the Eastern panel within the Barryroe license area of the Barryroe oil and gas field as a precursor to the phased full-field development of the field.

The program includes drilling of production wells, installation of subsea trees, subsea production manifold and connected to a leased FPSO with production separation, water and gas injection capabilities, and include flow assurance measures.

The SpotOn consortium is sourcing the rig which, subject to regulatory approval, expects to mobilize to the Barryroe oil and gas field in late 2022.

Alan Linn Chief Executive of Providence said: "The development of the Barryroe field is an exciting opportunity for the people of Ireland and the Barryroe partnership and, as production builds following the implementation of the Early Development Programme (EDP), we will begin to produce indigenous energy and petrochemical feedstocks for the Irish market.

"Over the coming months, we will be working with the SpotOn Team to complete the transaction; finalize the project schedule; progress the government approvals, and develop the detailed drilling and facilities work programs. I think Ireland and the Cork area will benefit economically from the field development and subsequent production for many years to come.”

According to Providence, the independently verified reports of the hydrocarbons recoverable within the Barryroe field concluded that a mid-case of 346 MMBOE of 2C resources was present within the Middle and Basal Wealden sands.