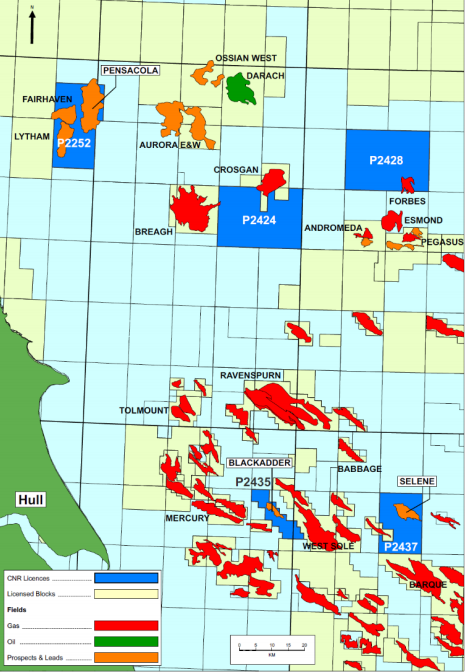 UK oil company Deltic Energy and oil major Shell have decided to drill what Deltic says is a potentially transformational Pensacola well in the North Sea, off the UK in 2022.

Shell as the operator, and Deltic as its partner, in the Licence P2252 in the North Sea, have made a positive well investment decision to drill the high-impact Pensacola Prospect.

"Following re-interpretation of the new 3D seismic data acquired over the prospect, Deltic estimates that the Pensacola Prospect contains gross P50 Prospective Resources of 309 BCF (with a P90-P10 range of 39 BCF to 1,181 BCF) which will rank Pensacola as one of the highest impact exploration targets to be drilled in the gas basin in recent years," Deltic said.

"Significantly, the Shell/Deltic JV's ("the JV") new interpretation of the 3D seismic data has also resulted in a much-improved view of the geological chance of success associated with the prospect which has increased materially from 20% to 55%," Deltic, previously known as Cluff National Resource, said.

"[Shell] expects the well to be drilled in May 2022 and this timing allows the JV to take advantage of a drilling unit that will be contracted by Shell as part of a multi-well drilling campaign which in turn brings advantageous day rates and operational efficiencies for the JV. Deltic remains fully funded for its 30% working interest in the well," Deltic said.

Graham Swindells, Chief Executive of Deltic Energy, commented:  "Confirmation of this well investment decision represents the achievement of another key milestone as we continue to execute our exploration-led strategy in the Southern North Sea with our world-class partner, Shell.  The rigorous re-evaluation of the Pensacola Prospect has validated and reinforced the fantastic work of our technical team and their initial view that the Pensacola prospect, and the Zechstein play as a whole, represented a significant missed opportunity in the Southern North Sea.

"Well planning is already underway, and we look forward to providing regular updates as we progress through the planning phase towards the commencement of operations, in addition to continuing to mature our other prospects, including Selene, towards drilling."