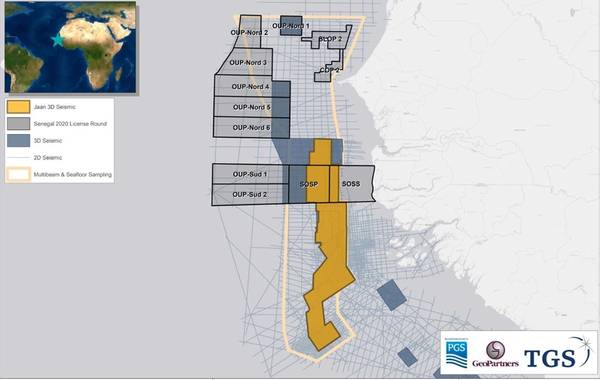 Norwegian seismic data company TGS has said it has, with its partners, completed the Jaan 3D seismic survey covering the MSGBC Basin in NW Africa acquired in partnership with PGS and GeoPartners.

Comprising over 28,000 square kilometers, the 3D survey spanning offshore Senegal, The Gambia, AGC, and Guinea-Bissau has been specifically designed to map the Cretaceous Palaeo Shelf-Edge Trend (PSET) and to shed light in untapped Jurassic potential.

This has been the setting for the FAN and SNE discoveries, Africa's most successful play of recent times, TGS said.

"Jaan 3D consists of both newly acquired (over 12,000 square kilometers) and recently reprocessed seismic surveys, processed and harmonized to create a seamless 3D PSTM and PSDM volume which allows explorers to obtain a holistic understanding of this prolific basin and its unique geological features of the shelf edge trend across borders," the company said.

The survey is, per TGS, also the current setting for anticipated and ongoing bid rounds, including the Senegalese 2020 License Round, which offers acreage on-trend with the FAN and SNE discoveries. Meanwhile, in The Gambia, Jaan 3D covers prospectivity similar to the FAR/Petronas targets in adjacent blocks.

Rune Eng, Executive Vice President, Global at TGS, said, “Recent and significant success in the MSGBC Basin demonstrates the importance of the province in terms of exploration not only in Africa but also worldwide. Learning from these giant discoveries and cross-border exploration success, the Jaan 3D survey has been specifically designed to highlight key play fairways and provide a vital exploration volume to enable E&P companies to unlock the next giant discovery.”