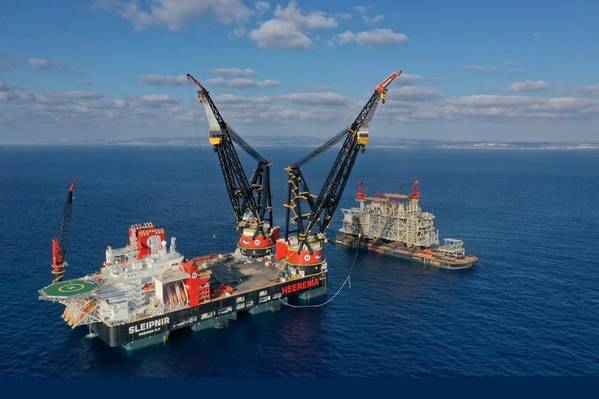 Port of Rotterdam is set to welcome Heerema's Sleipnir, the world's largest semi-submersible crane vessel, which is set to arrive at the port on Saturday, March 21, where it will be made ready for a North Sea decommissioning project.

Named after the Norse God Odin's eight-legged stallion, the vessel stands at 220 meters long, 102 meters wide, can accommodate 400 employees, and weighs 119,000 tons and is the first such unit powered by liquefied natural gas (LNG). The semi-submersible vessel has two cranes onboard, each capable of lifting 10,000 metric tons.

It was built last year in Singapore by Sembcorp Marine and was immediately put to action, first in the Mediterranean, then in South America, meaning this is its first port call in the Port of Rotterdam.

Sleipnir in September last year installed two main topsides at the Leviathan project off Israel, weighing 24,500 metric tons in total. This was done in less than 20 hours, and one of the lifts, at 15,300 metric tons, marked a world record for a crane vessel.

The Port of Rotterdam said Thursday that the Sleipnir would arrive on Saturday, having recently executed a project in Trinidad.

"The vessel arrives to prepare for future decommissioning work across the North Sea. By using Sleipnir, Heerema is working on cleaning up retired drilling platforms in the cleanest possible way with their use of emission-reducing LNG. The vessel is due to depart at the end of March for the first of several jobs," the Port of Rotterdam said.

To protect the health of Heerema’s onboard crew during the COVID-19 (coronavirus) outbreak, no visitors are permitted to visit the Sleipnir.

On the coronavirus pandemic and its effects on the port, the Port of Rotterdam has said it will remain operational, and cargo handling and production will continue unabated, but in compliance with the recommendations of national authorities in the field of health and safety, and steps taken to safeguard the continuity of business operations.

The port last week said it was following the measures announced by the Dutch government to prevent the further spread of the coronavirus.

"This means that from 13 until 6 April, the employees of the Port of Rotterdam Authority will work from home whenever possible...of course be reached by telephone or e-mail. The operational services will continue as always. The Port Coordination Centre is and remains accessible 24/7," it said last week.

In a statement given to Reuters on Thursday, the port's spokesperson said the Port of Rotterdam, Europe's largest, expects the flow of goods over the whole of 2020 to be "clearly below 470 million tonnes last year" as the coronavirus epidemic spreads across the continent.