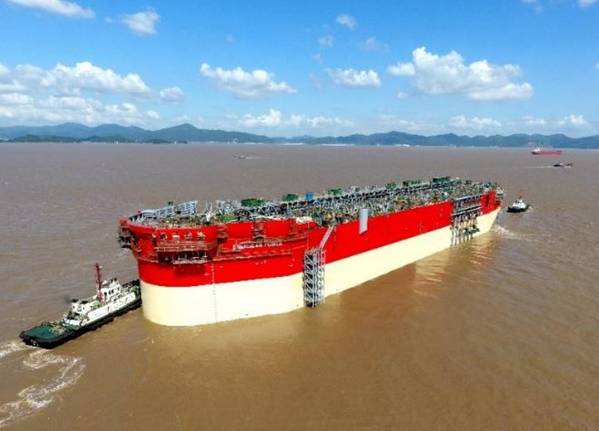 Greek oil company Energean has said that its Karish development in the Mediterranean Sea off Israel is on track for first production in the first half of 2021.

Energean has previously said that the first gas is expected to start flowing in the first quarter of 2021, however, delays with FPSO hull construction in China have added a few months to the original forecast.

To remind, the hull of the Energean Power FPSO was first floated out at COSCO Zhoushan Shipyards in China in October 2019.

However, in an update this week the oil and gas company said the hull sail-away date from the Cosco Yard in China would be delayed for March 31, which is a delay of 3.5 months, per the company.

However, Energean further said that excellent progress had been made on the topsides at the Admiralty Yard in Singapore "and it is still anticipated that the integrated Hull and Topsides will sailaway from Singapore to Israel around Year-End 2020 with first gas from the project anticipated during 1H 2021."

Meanwhile, Energean completed the drilling of the three Karish Main development wells during 2019 with completions being run, and the Christmas Trees expected to be installed before end 1Q 2020.

"All three development wells will then be ready for integration with the Sub Sea infrastructure and Hook Up to the FPSO," Energean said.

Mathios Rigas, Chief Executive, Energean said: "Karish and Tanin is on track to deliver first gas in 1H 2021 and we have now secured 5.0 bcm/yr of firmly contracted gas sales to Israeli domestic buyers, 1.3 bcm/yr of contingent gas sales and 2.0 bcm/yr of potential sales to be discussed under a Letter of Intent with Greece's DEPA. With the above we are fast approaching our goal to fill the capacity of the Energean Power.

"We are already looking at growth opportunities on the resource side from our nine blocks in Israel and on potential additional infrastructure capacity that will allow us to expand gas sales in the region."