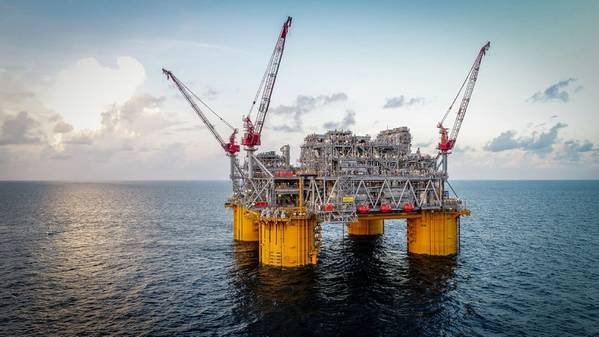 Appomattox floating production system in the US Gulf of Mexico (Photo: Shell)

The Shell-operated Appomattox floating production system in the US Gulf of Mexico has been brought into production several months ahead of schedule, the British-Dutch supermajor announced on Thursday.

The ultra-deepwater Appomattox development, a joint venture between Shell (79%, operator) and CNOOC (21%), is one of the largest projects launched in the Gulf of Mexico in recent years.

The platform is expected to produce 175,000 barrels of oil equivalent per day (boe/d), Shell said.

Shell is one one of the world's largest deepwater developers and is among the largest leaseholders and producers in the US Gulf of Mexico. Its deepwater production worldwide is on track to reach more than 900,000 boe/d by 2020.

Appomattox, located about 129 kilometers southeast of Louisiana, at 2,255 meters water depth, was discovered in 2010 as the first in a series of commercial finds by Shell in the prolific deepwater Norphlet formation.

Andy Brown, Upstream Director, Royal Dutch Shell, said, “Appomattox creates a core long-term hub for Shell in the Norphlet through which we can tie back several already discovered fields as well as future discoveries.”

Under budget
Since 2014, Shell has been able to reduce its deepwater unit development and operating costs by about 45%, the company said.

Since taking final investment decision (FID) for Appomattox in 2015, the project has realized cost reductions of more than 40% thanks to optimized development planning, design and fabrication, and drilling execution, Shell said.

“That Appomattox was safely brought online ahead of schedule and far under budget is a testament to our ongoing commitment to drive down costs through efficiency improvements during execution,” Brown said.

Crude oil produced from Appomattox will be moved westward through the 145 kilometer, 24-inch Mattox pipeline to the Proteus pipeline system and then onshore.

The 300,000 barrels per day capacity Mattox pipeline is also jointly owned by Shell and CNOOC, and it too was completed months ahead of schedule and under budget, Shell said.