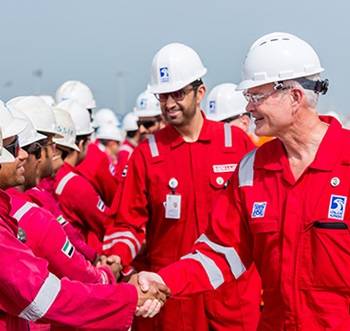 US oil giant ExxonMobil and Abu Dhabi's national oil company have met to discuss new opportunities for collaboration in the upstream and downstream sectors.

The discussions were held during a joint visit to review the two firm's US$ 30 billion (AED 110 billion) Upper Zakum expansion project, which will take the development up to a production capacity of 750,000 barrels per day (b/d) and then 1 million barrels per day (MMb/d), with the latter planned for 2024.

His Excellency Dr. Sultan Ahmed Al Jaber, UAE Minister of State and Group CEO of the Abu Dhabi National Oil Company (ADNOC), and Darren W. Woods, Chairman and CEO of Exxon Mobil Corporation (ExxonMobil) met and inspected key facilities at Al Ghallan Island which is under development for future production as part of the ongoing project, known as UZ750.

H.E. Dr. Al Jaber said: “Our partnership with ExxonMobil going back 80 years reflects the strong, deep-rooted and long-standing economic and political ties between the UAE and the US. Our existing partnership with ExxonMobil on the Upper Zakum field is a prime example of how ADNOC engages with world-class partners that bring expertise and advanced technology to unlock value from our resources, for mutual benefit, and deliver the greatest possible returns to the UAE. We are keen to strengthen this strategic partnership across the entire value chain, as we accelerate delivery of our 2030 smart growth strategy.”

Woods said: “We have shared many successes in the UAE together over the past 80 years, most notably with ADNOC in the Upper Zakum joint venture, and we look forward to building on this strong foundation. The joint success between ADNOC and ExxonMobil on Upper Zakum is a testament to what is possible when national and international energy companies work together.”

The visit follows the award, in April, by ADNOC and its joint venture partners, ExxonMobil Abu Dhabi Offshore Petroleum Company Limited and INPEX Corporation (INPEX), of a front-end engineering design (FEED) contract to increase the production capacity of the Upper Zakum oilfield to 1 mmbpd.

The Upper Zakum oilfield, located offshore Abu Dhabi, is the second-largest offshore oilfield and the fourth-largest oilfield in the world. The expansion project is part of ADNOC’s plan to increase its oil production capacity to 4 MMb/d by 2020 and to 5 MMb/d by 2030.

As a result of ADNOC’s long-standing experience in utilizing artificial islands, it has also adopted this approach in the development of the Ghasha Concession where 10 artificial islands are being constructed for the Hail, Ghasha and Dalma offshore sour gas megaproject.

ADNOC also collaborates with Occidental in onshore sour gas production and processing through ADNOC Sour Gas, a joint venture company between ADNOC, which owns a 60 per cent share and Occidental, which owns a 40 percent share. 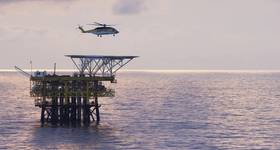