Drydocks World announced today that the world’s first Modular Capture Vessel (MCV), Eagle Texas, sailed away from its yard. The conversion of the AFRA max tanker was carried out by Drydocks World – Dubai and was completed for Singapore based AET, a global leader in petroleum shipping, and is the first of two similar projects. AET is under a 20-year agreement with Marine Well Containment Co. (MWCC) a consortium of 10 world-renowned companies comprised of Anadarko, Apache, BHP Billiton, BP, Chevron, ConocoPhillips, ExxonMobil, Hess, Shell and Statoil - all committed to safe deepwater drilling in the US Gulf of Mexico (GOM). The MCVs will operate as normal tankers in the GOM and would be deployed for containment services in the event of a deepwater well control incident in the region.

“We are...working with several of the leading industry players, who are members of Marine Well Containment Company, on ground-breaking projects and keeping-step with the know-how and emerging technologies in this field as we seek to enhance our involvement in projects such as these.” said H.E. Khamis Juma Buamim, chairman of Drydocks World and Maritime World.

“Our emphasis on safety and efficient project management has helped in the delivery of this challenging project. This accomplishment represents four million man-hours of hard work, all completed without a single lost time injury; this translates into a single person working without serious injury for nearly 2000 years. This is quite an exemplary achievement.”

The work scope of the shipyard included installing components such as four retractable azimuth thrusters, one tunnel bow-thruster, new machinery spaces, diesel generator sets and associated tanks, auxiliaries, switchboards, and electrical distribution equipment. The main engine was modified for CPP operation and a control system was added for dynamic positioning, power management, and equipment monitoring. Structural support stools and foundations were added for the future installation of topsides processing modules, a turret, flare tower, communications equipment, control facilities and other miscellaneous equipment. The ship’s systems were modified to provide services to topsides processing equipment, as well as hydraulic systems for the CPP, thrusters, cargo valve control and fire pumps. A new main-deck, central pipe-rack was fabricated and piping was installed to support topsides processing equipment. The ship‘s living quarters were also upgraded to accommodate more than 65 persons. Mechanical completion, pre-commissioning, commissioning, testing, and sea trials of the converted vessel were also carried out. 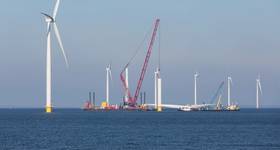 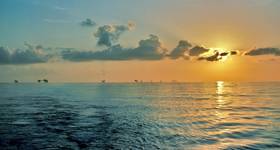