The government of Cyprus has selected companies, which include ExxonMobil, Eni, and Total, to negotiate exploration drilling terms for three blocks in the exclusive economic zone (EEZ) of Cyprus.

After receiving six applications from eight companies in July 2016 for its 3rd licensing round, the Cyprus Council of Ministers awarded the three blocks in the Mediterranean Sea.

Eni, and partner Total, which were the only applicants, won Block 6. Eni will be the operator with 50% stake, with Total holding the remaining 50%.

ExxonMobil, with partner Qatar Petroleum won Block 10. The duo won over Eni with partner Total; in addition to Statoil who applied as a solo act.

According to Eni, these areas have geological affinities with those successfully explored by Eni in the neighboring areas in the Egyptian offshore, with the discovery of the Zohr super-giant gas field.

“With these new assignments, Eni strengthens its strategic positioning in an area where, in addition to the blocks 9, 3 and 2 assigned following the 2nd international bid round in 2012, the company also holds three exploration blocks on the Egyptian side: Shorouk (where the Zohr field is located), Karawan (where Eni has a 50% stake) and North Leil (Eni 100%),” the company said.

“These assignments confirm the effectiveness of Eni’s exploration strategy, which keeps acquiring significant shares and uses the knowledge base resulting from the intense activity related to Zohr field. It is another step towards a possible future definition of a powerful hub for natural gas in the Eastern Mediterranean, which could play an important role in the future energy security of the area, as well as potentially in Europe’s energy security,” Eni CEO Claudio Descalzi said.

The Council of Ministers also appointed a team, led by the Minister of Energy, Commerce, Industry and Tourism, and the Minister of Finance, to negotiate the contract terms and provisions with the selected applicants.

“In case negotiations are successful, and provided that the agreed contract per individual Block is approved by the Council of Ministers, hydrocarbon exploration licenses shall be granted. Otherwise, the runner-up applicants will be invited for negotiations,” the Cypriot government said.

So far, the Republic of Cyprus has defined13 exploration blocks at the south of the island, following international bilateral agreements with Egypt, Lebanon and Israel, according to business consultancy PwC.

However, the only block drilled in the area has been Block 12 covering 2684sq km by Noble Energy.

Noble discovered the Aphrodite field in 2011, which is estimated to contain about 4 Tcf of gas. Noble has submitted a preliminary field development plan for Aphrodite to the Cypriot government. 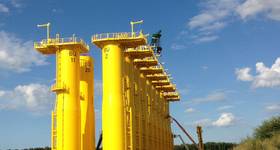