Heerema Marine Contractors is planning a new semisubmersible crane vessel (NSCV), which, according to crane supplier Huisman, will have the world's largest cranes on board.

At 214m-long and 97.5m-wide, the NSCV will become the world’s largest semi-submersible crane vessel, says Heerema.

CEO Jan-Pieter Klaver says HMC plans to evaluate various shipyards for the construction of the hull in 2H this year before a final investment decision will be taken.

The NSCV will be deployed globally and will be self-propelled with a transit speed of 10 knots. The vessel’s hull configuration consists of a large deckbox mounted on an eight-column structure mounted on two pontoons.

Earlier, HMC signed a Basic Design contract with KBR subsidiary GVA for the development of the new crane vessel.

Huisman said it has received a letter of intent for the delivery of the cranes, which will have a lifting capacity of 10,000-tonne at a radius of 48m.

They will be tub-mounted and built at Huisman's production facility in China. The final decision to build this new semisubmersible crane vessel will be made by Heerema before the end of this year.

According to Huisman, unlike traditional tub cranes, which make use of either bogies or large wheels for their slew system, the Huisman cranes will make use of large bearings of the company's design, which are manufactured in-house.

"The use of bearings on the new 10,000-tonne Heerema cranes, instead of the traditional slew systems, allows for very accurate control of the slewing motion of the crane and requires very little maintenance.

"Another large benefit of using a bearing is a very significant weight saving. Especially on semisubmersibles this is an important feature. The slew bearings of these cranes will have a diameter of 30m."

The two cranes for the planned semisubmersible also feature a 2500-tonne auxiliary hoist and a whip hoist, with a maximum reach of 155m.

The main hoist, in a reduced reeving, can lift 1000-tonne to 1000m water depth and is fitted with active heave compensation.

Interview with HMC CEO on the new NSCV 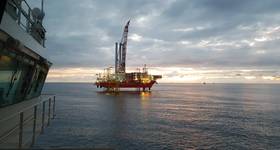