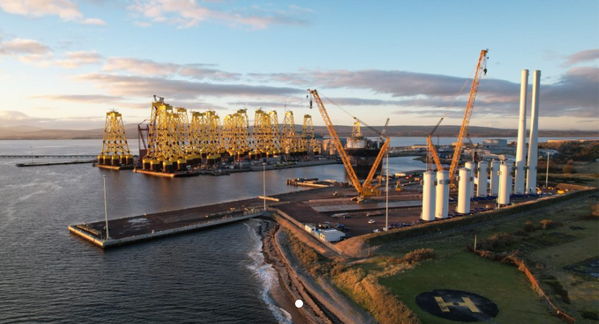 Global Port Services, owned by Global Energy Group alongside the Port of Nigg, has said it has secured multiple contracts to support its client Seagreen Wind Energy Limited (SWEL), with site enabling works for the pre-assembly construction of wind turbine components (WTGs) at its Port of Nigg facility.

The news comes as the final turbine foundations for Seagreen arrive at Nigg to be prepared for installation at Seagreen offshore wind farm site, 27km off the coast of Angus.

Seagreen, owned by TotalEnergies and SSE Renewables, will be Scotland’s largest and the world’s deepest fixed foundation offshore wind farm once complete and will power more than 1.6 million households. With a total installed generating capacity of 1,075 MW, the project is due to be fully operational in summer 2023.

The contracts, which are expected to run through to summer 2023, will see Global Port Services provide proven project management and technical support for site enabling works, pre-assembly set up, as well as ongoing services to include crane support, SPMT’s and associated labor, plant, equipment, and quayside services— supporting Danish firms Vestas Offshore and BMS Heavy Lift, who will carry out the onshore assembly and offshore installation for Seagreen.

"The overall pre-assembly construction project is supporting more than 100 skilled jobs at the Port of Nigg, delivering a green jobs boost and significant economic benefit to the Highlands and Scotland," Global Port Services said.

Wind turbine generators are to be installed on top of offshore turbine foundations. Global Port Services is simultaneously fulfilling the storage, marshaling and logistics contracts for the 114, 95m-tall ‘yellow jacket’ foundation towers for Seagreen on the South Quay at the Port of Nigg, under a separate contract with Seaway 7.

According to the company, this will be the first major infrastructure and pre-assembly contract of its type to be brought to the Port since the unveiling of the new purpose-built East Quay in July, and offers 160,000 m2 of adjacent project areas comprising laydown, storage and assembly yards with dedicated warehousing and client project offices.

At 225m long and 50m wide, the East Quay increased the port facility’s deepwater quayside capacity to over 1,200m  enabling logistics specialists Global Port Services to service simultaneous OWF foundation and turbine tower contracts as is being done for Seagreen.

Speaking about the contract award, Alistair Gordon, Executive Officer for Global Port Services, said: “We are delighted to support yet another significant project for wind energy in Scotland, working with Seagreen, Vestas and BMS for the site enabling, storage, assembly and load out of these key components for what will be Scotland’s largest offshore wind farm.

"Won on the back of the successes of the Siemens Beatrice and Vestas Moray East offshore wind pre-assembly contracts, which were also Scotland’s largest OWFs at the time, the new contract awards are an accolade to the excellent logistics support services and dedicated facilities on offer at Nigg, and it marks the first major project to be secured for the new East Quay, of which I hope there will be many more.”