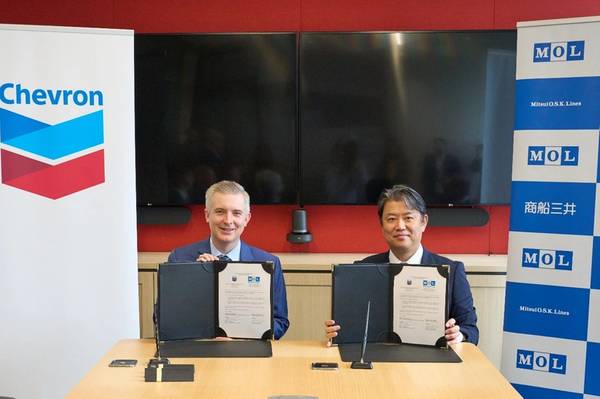 Chevron New Energies International Pte. Ltd, the U.S. oil major's subsidiary, and MOL will explore the technical and commercial feasibility of initially transporting up to 2.5 million tonnes per annum of liquefied carbon dioxide by 2030, Chevron said in a statement on Thursday.

It is the latest foray by Chevron, which last year set a target to cut operational emissions to net zero by 2050, into carbon capture and storage. In September, Chevron, Air Liquide, Keppel Infrastructure, and PetroChina signed a memorandum of understanding to evaluate and advance the development of large-scale carbon capture, utilization, storage (CCUS) solutions and integrated infrastructure in Singapore.

"We expect this agreement with MOL to advance the technical and commercial foundations for a regional approach to CCUS, which could provide progress toward the region's net-zero ambitions," said Chris Powers, vice president, CCUS, at Chevron New Energies.

Chevron, through its affiliate Chevron Australia Pty Ltd, is also part of joint ventures that have been granted an interest in three permits to assess carbon storage offshore Australia, it announced in September.

The offshore blocks, off Western Australia and the Northern Territory, total nearly 7.8 million acres in size.