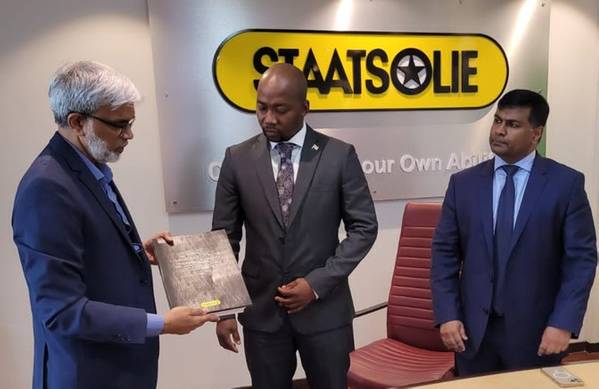 Suriname's state firm Staatsolie and a unit of Chevron Corp have signed a production sharing contract for exploring and producing oil at an offshore block, the companies said on Wednesday, expanding their cooperation in the country.

Suriname is a small onshore crude producer, but the South American nation has yet to confirm billions of barrels of estimated oil and gas resources after discoveries by European, Asian, and U.S. companies, before starting offshore output.

Following an auction by Staatsolie in 2021, where Chevron, TotalEnergies, and Qatar Petroleum won exploration rights in several blocks, the state firm is expanding partnerships to ramp up exploration in the promising shallow water basin, located near oil producers Brazil and Guyana.

Chevron's Suriname unit in December transferred a third of its 60%-equity interest in another block off the country's coast to a unit of Royal Dutch Shell, creating a three-party group with Staatsolie. Earlier last year, Staatsolie and Chevron had signed a 30-year production sharing contract for that area, the Block 5.

The new contract with Chevron for Block 7, in the west of the shallow offshore area, was signed on Tuesday, leaving Chevron with an 80%-stake in the project and Staatsolie with the remaining 20%, the companies said in releases.

"We look forward to working together with our partner and supporting the development of Suriname's energy sector through this exploration program," Chevron said.

Costs in an eight-year exploration phase will be carried by Chevron, the area's operator. The U.S. firm must give preference to materials, services and products offered by Surinamese companies, Staatsolie said.

In blocks 58 and 52, where firms including Apache Corp, TotalEnergies, Petronas, and Exxon Mobil have announced oil and gas discoveries in recent years, more drilling is planned in the coming years so projects can decide whether to move to the development phase.