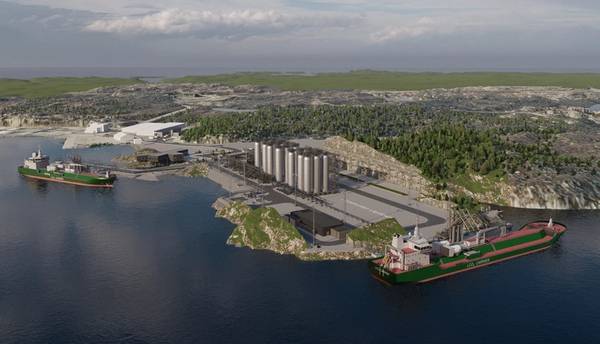 Illustration of what the expanded CO2 receiving terminal in the municipality of Øygarden in western Norway may look like. ©Northern Lights

The Northern Lights joint venture, owned by Equinor, TotalEnergies, and Shell, said Thursday that the European Commission had announced that EU countries had agreed to provide the funding.

The funding is planned for Front-End Engineering Design (FEED) studies for the expansion of the Northern Lights CO2 transport and storage capacity to over 5 million tonnes per year.

Northern Lights will be awarded the funding based on its designation as a Project of Common Interest (PCI) in Europe under the 4th PCI list, a key cross-border infrastructure project that supports the EU’s climate policy objectives.

"We are very pleased that the European Union will support studies enabling expansion of the Northern Lights infrastructure to over 5 million tonnes per year. The FEED study will cover the expansion of the facilities, including the receiving terminal located in Øygarden in western Norway,” said Cristel Lambton, Technical Director in Northern Lights JV.

The planned expansion will include subsea facilities and capacity increase of the onshore receiving terminal in Øygarden: A second jetty to cater for additional volumes of imported CO2 from larger ships; Additional intermediate storage for CO2 with additional volume; Additional CO2 export pumps.

The Northern Lights project comprises transportation, receipt, and permanent storage of CO2 in a reservoir in the northern North Sea, and will be open to third parties. The project will initially include the capture of CO2 from Norwegian industrial capture sources.

The project is planned to be the first-ever cross-border, open-source CO2 transport and storage infrastructure network, offering European industrial emitters the opportunity to store their CO2 permanently underground. Once the CO2 is captured onshore, it will be transported by newly designed ships, injected, and permanently stored 2,600 meters below the seabed of the North Sea.

Phase one of the project is planned to be completed in mid-2024 with a capacity to store up to 1.5 million tonnes of CO2 per year, in the Johansen formation south of the Troll offshore field. As demand from industrial sectors in Europe grows, Northern Lights will increase storage capacity.