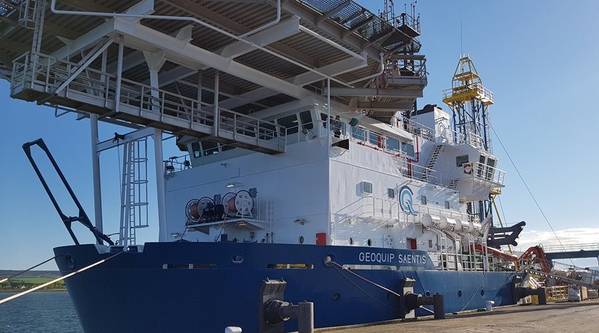 "U.S. wind power should mean U.S. jobs," said OMSA president Aaron Smith. "Our report provides a case study of how far too often wind projects are instead creating jobs for Estonians and Romanians, while capable American mariners sit on the shore. We've detailed how a foreign company—by their own admission—used a Chinese-built vessel with foreign crew members to transport cargo within U.S. waters. That's illegal."

"Lobbyists for the offshore wind industry have claimed their clients will only utilize foreign-flagged vessels when there is not a U.S.-flagged vessel available," Smith added. "Today’s report shows that’s simply not true. Wind developers will continue to exploit lax enforcement of U.S. laws to utilize Chinese-built and foreign-crewed vessels."

In response to OMSA's report, Geoquip Marine said its vessels do not transport cargo or merchandise: "The Geoquip Saentis is an [integrated geotechnical survey vessel], it is dedicated to research and has world-leading drilling technology and an onboard laboratory. It collects seabed data, allowing geotechnical parameters to be derived and supporting environmental research.

"Geoquip Marine has historically relied upon the longstanding position that research work of the type that it is specifically focused on analyzing the characteristics of the seabed is not covered by the provisions of the Jones Act."

The Geoquip Saentis was built in 2005 in China and was originally operated as a platform supply vessel (PSV) before it was purchased by Geoquip Marine in 2019 and converted to perform geotechnical surveys. "It doesn’t appear that the vessel ever registered its change of ownership or the modification with the U.S. Coast Guard, nor had the geotechnical equipment retrofitted onto the vessel inspected by the U.S. Coast Guard, the Bahamian government (where the vessel is flagged), or the international classification organization tasked with ensuring this equipment is safe," OMSA said.

OMSA also detailed how the Geoquip Saentis is crewed by Estonian, Romanian, and Polish mariners without the proper documentation required by the Outer Continental Shelf Lands Act (OCSLA). The trade group could not verify the wages for these Eastern European seafarers, but it said in its report that foreign mariners are typically paid significantly less than their U.S. counterparts.

"It is wrong to insinuate that Geoquip Marine crew are hired at rates below industry standards. Geoquip Marine prioritizes the crew welfare in its quest for accuracy and those crew are very well treated, very well rewarded and are given continual training to guarantee that they are able to operate to the highest standards of safety and efficiency."

Geoquip Marine said it has been involved in offshore energy projects in Virginia, New Jersey, New York and Massachusetts, and emphasized that it is "committed to long-term operations in the United States", having recently established a U.S. entity. The company said it "uses highly qualified U.S. crew whenever possible and actively encourages U.S. crew to apply to work on its vessels".

The Geoquip Saentis is currently working for offshore wind projects on the U.S. East Coast, according to OMSA, who said the vessel left New Bedford, Mass. on November 13 and seemed to be heading to an offshore wind project South of Nantucket. However, the vessel’s automatic identification system (AIS) signal has been made inaccessible, a violation of U.S. law and international safety regulations.

The Geoquip Marine report is the second filed under OMSA's recently launched "Jones Act Enforcer" program. In August, the group said Louisiana-based Triton Offshore had been using a Chinese-built, Vanuatu-flagged derrick barge to transport cargo between points off the coast of Louisiana.

When reached for comment, Triton Offshore president Roy Buchler said, "We cannot discuss matters that are or will be in litigation" 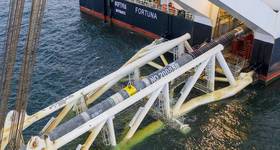