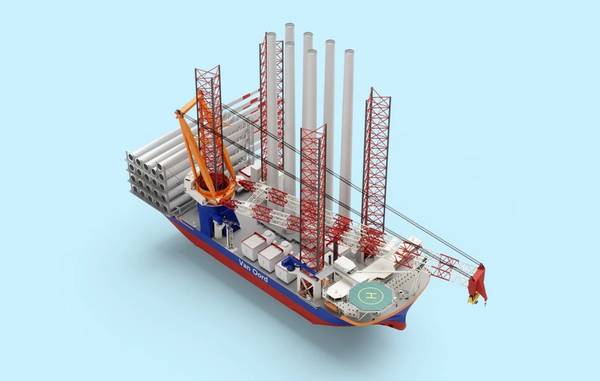 NOV-BLM has won a contract to deliver the jacking system for the new offshore wind installation vessel ordered by Van Oord.

Van Oord, the Dutch marine and offshore services company, last week placed an order for a jack-up vessel that will be able to install next-generation wind turbines of up to 20MW. The vessel will be built by Yantai CIMC Raffles Shipyard in China.

NOV-BLM said Wednesday it had secured a contract to deliver the latest generation of NOV-BLM jacking system to lift the Van Oord’s mega jack-up to install the next-gen MW wind turbines. It did not share details on the contract value.

The giant jack-up vessel will be able to operate on methanol, reducing its CO2 footprint. The ship is expected to enter the market in 2024.

The 175-meter offshore installation vessel will be able to transport and install both foundations and turbines at offshore wind farms. It will be equipped with a Huisman crane able to lift more than 3,000 tonnes.

According to a recent report by World Energy Reports, over 100 new offshore wind turbine and foundation installation and maintenance vessels will be required for offshore projects planned over the next decade, as the number of proposed projects grows, but also as the turbines and foundations get larger, meaning the currently available fleet won't be able to install them. What is more, most of the current fleet could become obsolete by 2025.  Read more.