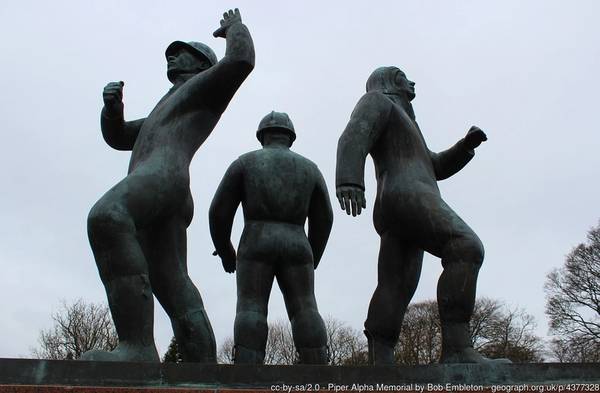 Piper Alpha Memorial - Commemorating the 167 men killed on the 6th July 1988 on the oil platform. Designed and sculptured by Sue Jane Taylor and unveiled by Her Majesty Queen Elizabeth the Queen Mother on the 6th July 1991. Image by: Bob Embleton/Geograph.org.uk

In this article Head of HSES at the specialist engineering and technical consultancy, Vysus Group, Steve Harris reflects on one of the most tragic industrial incidents that the world has ever seen which unfolded on the evening of 6th July 1988, Piper Alpha. The incident killed 165 of 220 crew members on board, and a further two heroic crew members from the standby vessel Sandhaven.

This event saw a series of explosions rip through the 34,000-ton Piper Alpha platform with the almost immediate loss of 167 lives. Amazingly 61 souls survived, some of which did so by jumping as much as 175ft (53m) from the platform’s helicopter deck into the burning sea.

The associated wells and the oil and gas lines (all of which ruptured) produced fires with flames that reached 200 meters and had a peak consumption rate of ~100 gigawatts, three times the rate of the United Kingdom’s total energy consumption.

The platform was lost to sea within three hours, causing $3.4 billion of total insured damages and taking a further three weeks for the raging fire to be brought under control by Red Adair and his team, who were American oil well firefighters. They became notable internationally as innovators in the highly specialized and hazardous profession of extinguishing and capping oil well blowouts, both land-based and offshore.

The uncomfortable truth is that in the lead up to the event, the asset’s management had been supplied with several reports that predicted what later transpired.

One report published in 1986 concluded that a prolonged high-pressure gas fire would be impossible to fight, another later created in 1987 highlighted the risks to personnel from platform abandonment, and yet another followed in 1988 which stated that a critical aspect of structural integrity could be lost by fire inside of 15 short minutes. Unfortunately, solutions such as the installation of sub-sea isolation valves and fireproofing structural members were labeled as impractical.

Disappointingly, there were also other warnings that there were weaknesses within the safety management system on Piper Alpha. Less than a year earlier, on the 7th September 1987, a rigger died in an incident on Piper Alpha, the investigation of which highlighted inadequacies in the permit to work system. Whether by direction or inaction the management of Piper Alpha also failed to drive home the lessons of that event, which had the potential to prevent the impending disaster a year later.

One week after the disaster, Lord Cullen, a Senator of the College of Justice in Scotland, was appointed to hold a public inquiry into the incident. Piecing together precisely what happened, why it happened and how to prevent reoccurrence took nearly two years and, due to much of the physical evidence resting at the bottom of the North Sea, the testimony of survivors and witnesses played a key role in creating a coherent timeline of circumstances.

The comprehensive 400-page investigation presented a staggering amount of detail regarding a catalog of failures, early warning and missed opportunities that were treated as either totally innocuous, commonplace or did not give undue cause for concern.

Lord Cullen’s report set out a total of 106 recommendations, the responsibility for implementation of which was shared between the industry and the regulator. Even today, it is unarguable that many of those recommendations are still relevant across all hazardous industries, from aviation to nuclear.

One of the more obvious lessons that Piper Alpha has taught us is that it is of paramount importance that organizations associated with major accident hazards recognise that they have a greater potential for disastrous consequences and carry a higher potential cost in terms of both lives and money.

These consequences mean that those managing major hazards are duty-bound to aspire to a much higher standard of reliability than in normal commercial decision making, and their arrangements and decision making must reflect that responsibility.

As we emerge from the COVID-19 pandemic, it is now more important than ever that we collaborate as an industry to ensure that all of our work is built upon proven decision making processes and solid engineering practices that lower the risk of an unplanned event to as low as reasonably practicable (ALARP).

We must all be watchful and cognisant of the paradigm shift within organizations and on installations that was caused by COVID-19. The impact in many cases has resulted in operating models that can contain untested and unproven reporting relationships, objectives, resources allocations, management systems, available expertise, engineering support, procurement, and so on.

In summary, it has been proven beyond all reasonable doubt that it is very possible to recognize and prevent major accident causation anomalies before they escalate to a tragic chain reaction.

That statement is not based upon the false economy of hindsight bias but built upon the foundations of too many instances of the worst type of loss. It is too often that we hear tales that the qualitative opinion of senior onshore or offshore management has trumped the systematic identification and assessment of hazards. That kind of corner cutting does not belong in our industry and sets a tone which will shape the attitude, behavior, and practices within the rest of the organization and on the installations.