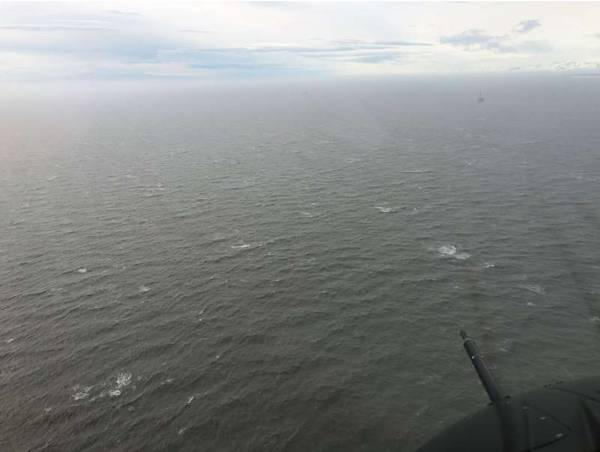 Cook Inlet Hilcorp Platform A is seen in the distance during 1100am overflight on Sunday, April 4. No wildlife, no sheen and no disturbance were detected. (Photo: Hilcorp)

The affected platforms account for roughly an eighth of the total Cook Inlet basin oil production of a little more than 11,000 barrels per day, according to state data. Cook Inlet, a wide channel that runs from the Anchorage area to the Gulf of Alaska, has more than a dozen oil and gas platforms.

The gas leak occurred in a pipeline that supplies fuel for the platforms’ operations but was not carrying any hydrocarbons produced by the platforms, said state officials and officials with privately held Hilcorp. The leak was spotted last week by a pilot flying over the inlet, the Alaska Department of Environmental Conservation said.

The eight-inch pipeline is the same line that ruptured more than four years ago and leaked for months before it was repaired in April of 2017, the environmental department said.

"No sheen has been observed. An assessment of the source of the leak is ongoing. No personnel or wildlife have been impacted,” Miller said in an emailed statement. Divers will install a temporary clamp on the line later this week, he said.

The Cook Inlet basin, with onshore and offshore facilities, is the oldest producing oil and gas region in Alaska. Hilcorp’s Alaska unit, now the operator of the giant Prudhoe Bay unit on the North Slope, is the dominant Cook Inlet operator.