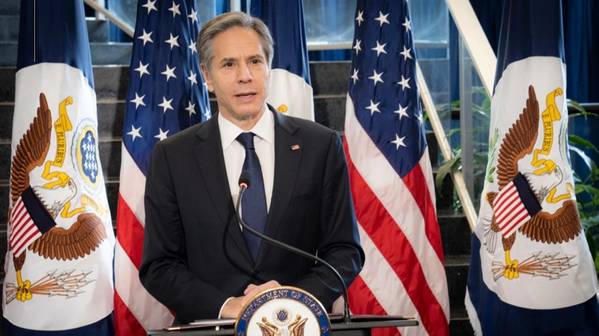 U.S. Secretary of State Antony Blinken said in an interview broadcast on Sunday that it was ultimately up to those building the Nord Stream 2 natural gas pipeline whether to complete it despite opposition from Washington.

On Wednesday, Blinken said he had told his German counterpart that U.S. sanctions against the pipeline from Russia to Germany were a real possibility and there was "no ambiguity" in American opposition to its construction.

Because the pipeline would run from Russia to Germany under the Baltic Sea, bypassing Ukraine, critics argue that it would deprive Kiev of lucrative transit revenues and potentially undercut Ukrainian efforts to counter Russian aggression.

The Kremlin says the $11 billion venture led by Russian state energy company Gazprom is a commercial project, but several U.S. administrations have opposed the project.

Asked if there was anything the United States could do to stop the pipeline, Blinken told CNN in an interview broadcast on Sunday: "Well, ultimately that is up to those who are trying to build the pipeline and complete it. We just wanted to make sure that our ... opposition to the pipeline was well understood."