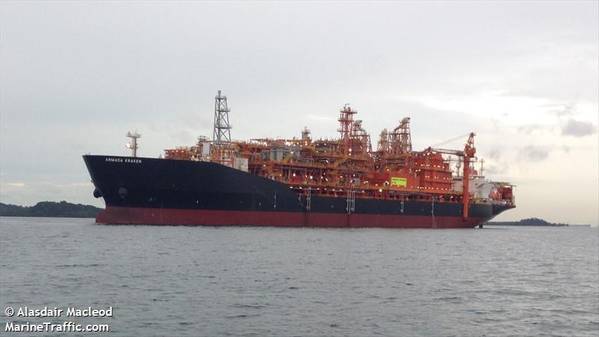 Malaysian FPSO company Bumi Armada posted a net profit of RM144.1 million (around $35,5 million) in the fourth quarter of 2020.

According to the Malaysian firm, the 4Q 2020 net profit grew mainly due to higher revenue from the Armada Kraken FPSO, which is deployed at EnQuest's Kraken field the UK North Sea, and a higher share of results of joint ventures and associates.

This was partly offset by a softer performance from the Offshore Marine Services branch due to lower OSV vessel utilization in Q4 2020 as compared to Q3 2020.

EnQuest itself earlier this month said that the Armada Kraken FPSO had had "better than expected production efficiency."

"The floating, production, storage and offloading vessel performed well throughout 2020, with better than expected production efficiency of 87% and high water injection efficiency of 91%. Successful drilling at Worcester resulted in a new producer-injector pair coming onstream late in the second quarter. Overall subsurface and well performance has been good, with the rate of water cut evolution remaining stable," EnQuest said earlier in February.

Back to Bumi Armada, the company's future firm order book at the end of Q4 2020 amounted to approximately RM16.0 billion (USD 3,95 billion), with additional optional extensions of up to RM9.7 billion (USD 2,4 billion).

Commenting on the results, Gary Christenson, Chief Executive Officer of Bumi Armada said, "Despite operational and logistical hurdles caused by the Covid-19 pandemic, Bumi Armada has maintained our excellent HSE performance in the fourth quarter of 2020 with zero lost-time injuries.

"Our focus on operational excellence and cost efficiencies underpinned the solid financial performance over the same period.

"Since the close of Q4 2020, we have also secured an extension of our Tranche 1 corporate loan final maturity from 23 May 2021 to 23 November 2022. We will continue to focus on safety, sustainability, operational excellence, and financial discipline."