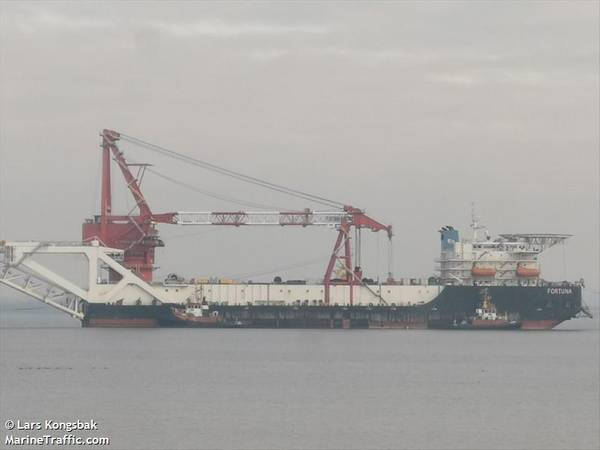 The United States on Tuesday imposed sanctions on a ship involved in building the Nord Stream 2 pipeline to take Russian natural gas to Europe, as the Trump administration sought to raise pressure on the project on its last full day in office.

The U.S. Treasury Department said it imposed the sanctions on the Russian pipe-laying ship "Fortuna" and its owner, KVT-RUS, under the Countering America's Adversaries Through Sanctions Act (CAATSA).

Nord Stream 2, designed to double the capacity of the existing Nord Stream undersea gas pipeline, would take gas to Europe via Germany, bypassing Ukraine, which would deprive Kiev of lucrative transit fees.

The project is a rising point of contention between Moscow and Washington. The United States, eager to sell Europe more liquefied natural gas, says Nord Stream 2 would increase Russia's economic and political leverage over Europe. Moscow and Germany say it is a commercial project.

"The United States is not afraid to hold accountable those who continue to aid and abet this tool of Russian coercion," Secretary of State Mike Pompeo said in a statement.

The State Department said it would consider further actions in the near term, under CAATSA and under new sanctions expanded in the annual defense policy bill.

Hours before the official announcement, Kremlin spokesman Dmitry Peskov told reporters the project was under "unlawful" U.S. pressure and that the Kremlin was closely watching developments in order to ensure the pipeline's completion.

President-elect Joe Biden, who will replace President Donald Trump on Wednesday, has opposed Nord Stream 2 in the past. Antony Blinken, Biden's nominee to be secretary of state, told his Senate confirmation hearing on Tuesday that Biden strongly agrees with members of Congress that the pipeline is a bad idea.

Blinken told the Senate Foreign Relations Committee that he had not discussed the issue at length yet with Biden, but the administration will use "every persuasive tool" available to persuade countries including Germany.

Germany, seeking to wean itself off nuclear and coal-fired power plants, said it was disappointed by the fresh sanctions on Monday, after Washington gave Berlin early word of the action.

RISKS OF BEING SCRAPPED

Gazprom acknowledged in a Eurobond prospectus seen by Reuters on Tuesday that there are risks the project may be suspended or scrapped.

Gazprom suspended work on the pipeline in late 2019 after the main pipe-laying company, Allseas, dropped out after Trump signed other sanctions.

Work resumed last month when a small 1.6 mile (2.6 km) stretch of the pipeline was built in German waters.

More than 90% of the project has been completed, but more than 62 miles (100 km) must still be laid in an area off Denmark that requires highly-specialized construction equipment.

According to Refinitiv ship-tracking data, the Fortuna is still anchored in the Baltic Sea near Rostock in northern Germany.