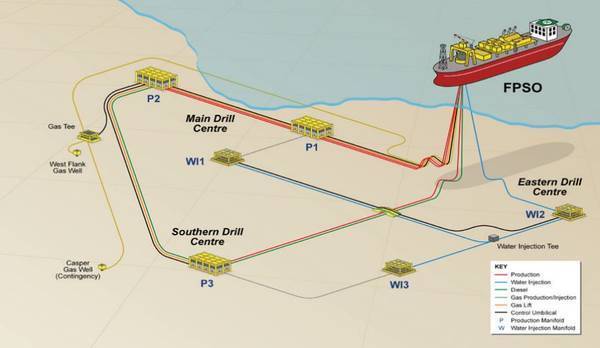 Oil and gas firm Rockhopper Exploration, with an interest in the Sea Lion project off the Falkland Islands, and Premier Oil as the operator, have reached an agreement with Israeli firm Navitas Petroleum to extend the exclusivity period for the latter's farm-in into the project.

To remind, back in January this year, Premier Oil as the Sea Lion operator, and Rockhopper, as the partner in the project, signed non-binding heads of terms with Navitas Petroleum, with a goal of Navitas eventually obtaining a 30% interest in the Sea Lion offshore blocks.

Then, the collapse in oil prices and the global pandemic ensued, however, Rockhopper in March maintained it was confident the farm-out would go ahead despite the low oil prices and COVID-10 uncertainty.

The plan was for Premier Oil to remain the operator of the project with a 40% share, while Rockhopper, which discovered the Sea Lion oil field in 2010, would retain 30%. Premier Oil currently owns a 60% share in Sea Lion, with Rockhopper holding a 40% stake.

Come May, Premier Oil said it had suspended the Sea Lion-1 oil project  "to minimize ongoing spend in light of the current market conditions."

"Sea Lion Phase 1 is complete from a technical aspect and all of the work which has been done to date is being fully documented, such that the project can be reactivated once the macroeconomic outlook improves," Premier Oil said at the time, adding that Navitas was still interested in the farm-in.

Subject to an FID, the companies involved in the offshore project plan to develop the Sea Lion oil accumulation in phases. The first phase for the Sea Lion entails the development of 250 million barrels (mmbbls) of resources in PL032 using a conventional floating production, storage and offloading unit (FPSO) based scheme. As shared by Rockhopper, Sea Lion's independently audited 2C resources are around 520 mmbbls.

On October 6, Premier Oil said it had agreed to merge with North Sea-focused Chrysaor.

According to Rockhopper, following the announcement of the proposed merger of Premier Oil and Chrysaor, Navitas has again confirmed that it remains committed to the proposed farm-in.

Rockhopper said Monday that in order to enable the merger to complete and the new management of the combined entity to make a firm decision on the Sea Lion project, Rockhopper, Premier and Navitas have agreed to extend the exclusivity period for the farm-in to the earlier of (i) 30 September 2021; (ii) the execution of definitive transaction documents, or (iii) a decision by Navitas not to proceed with the farm-in. During this period, Rockhopper's share of Sea Lion project costs will continue to be borne by Premier under the same terms as previously announced.

Discussions are also continuing with the Falkland Islands Government around a possible extension to licenses PL004 and PL032 which currently expire in May 2021, Rockhopper said.

Samuel Moody, Rockhopper Chief Executive Officer, said: "We will work closely with all stakeholders over the coming months to maximize the chance of securing the farm out and project sanction of Sea Lion. We believe that the opportunity to invest in a 500 million barrel fully appraised and engineered project with material additional upside at this point in the cycle presents a compelling opportunity, and one which would lead us towards unlocking the value within the project long-awaited by all stakeholders."