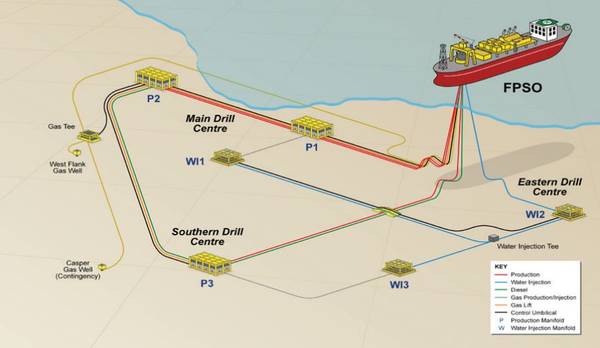 Premier Oil and Rockhopper, two oil companies working to develop the Sea Lion oil field offshore the Falkland Islands, have welcomed Navitas as their potential new partner in the project.

The companies have signed non-binding heads of terms with Navitas Petroleum, which should lead to Navitas obtaining a 30% interest in the Sea Lion offshore blocks.

Premier Oil will remain the operator of the project with a 40% share, while Rockhopper, which discovered the Sea Lion in 2010, will retain 30%.

The companies involved in the offshore project plan to develop the Sea Lion oil accumulation in phases. The first phase for the Sea Lion entails the development of 250 million barrels (mmbbls) of resources in PL032 using a conventional floating production, storage and offloading unit (FPSO) based scheme. As shared by Rockhopper, Sea Lion's independently audited 2C resources are around 520 mmbbls.

"Navitas add valuable offshore experience from their Gulf of Mexico projects and hugely successful prior personal involvement in Israel's offshore sector. They also materially strengthen and enhance the prospects for a successful project financing, as clearly demonstrated by their success in funding other similar developments elsewhere in the world and with proven access to capital markets.

Worth noting, existing funding arrangements between Rockhopper and Premier are to be replaced such that Rockhopper is funded for all pre- and post-sanction costs not met by senior debt by Premier and/or Navitas through a combination of carry and loans.

Moody said, "Furthermore, we are obviously very pleased to announce that all of our project costs are being covered from the start of 2020 and in the event of a successful sanction that they will continue to be covered through to Phase 1 Project Completion (estimated 9-12 months after first oil) while maintaining a very material 30% stake in the Sea Lion project along with additional upside in the PL004a license containing the Isobel discovery. This transaction will therefore materially strengthen the company financially."

"Discussions are continuing to progress with senior lenders regarding project financing and should be positively supported by the Transaction. We will update the market on the progress of those discussions in due course.

"Our arrangements with Navitas are at a detailed non-binding Heads of Terms stage and we look forward to working with them to put in place formal binding documentation in the coming months. In the intervening period, we are pleased that Premier has separately agreed funding arrangements for all of Rockhopper's costs on Sea Lion."

Rockhopper said Tuesday that the finalization of a sale and purchase agreement with Navitas is expected during the first quarter of 2020. The farm-in completion, subject to the conclusion of senior debt financing and regulatory approval, is expected in the second quarter of 2020.

Following farm-in completion, but prior to April 1, 2021, Navitas can exercise a withdrawal right, subject to certain conditions including in the event that Phase 1 final investment decision (FID) has not occurred.

In the event that Navitas' board has failed to take a positive Phase 1 FID by 1 April 2021, or otherwise fails to secure its share of funding, Premier may elect to remove Navitas.

Rockhopper back in August said that that capex to first oil at the Sea Lion project was estimated at approximately $1.8 billion (gross).