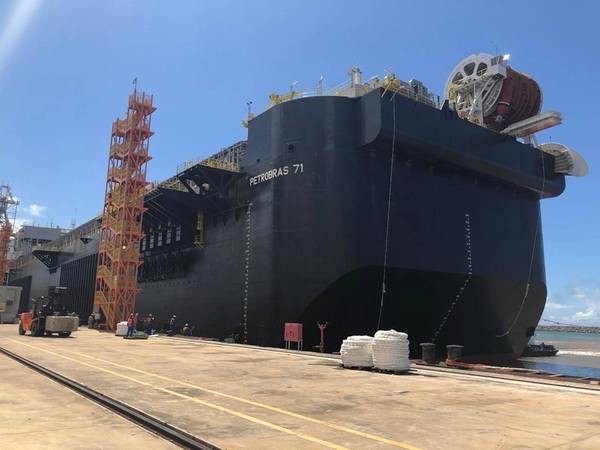 Brazilian national oil company Petrobras has agreed to buy the P-71 Floating Production Storage and Offloading (FPSO) vessel and use it for the development of the Itapu field.

Petrobras said that the FPSO was to be used at the Tupi field, however, after negotiations with its partners in BM-S-11 Consortium, Shell Brasil Petróleo Ltda (25%) and Petrogal Brasil S.A. (10%), Petrobras agreed to buy the FPSO for $353 million, the amount corresponding to the partners' share in P-71.

The P-71, the hull of which arrived in Brazil earlier this year, is in the final phase of construction at the Jurong Shipyard, state of Espírito Santo, Brazil. The 316 meters long, 54 meters wide, hull, was built by CIMC Raffles in China.

It has a production capacity of 150 thousand bpd, and will be allocated for the Itapu offshore field. Petrobras, which owns 100% rights in the Itapu field, said that the first oil could be expected in about one year.

Further, Petrobras said that given that it would use the P-71 FPSO on the Itapu, the bidding for the charter of the FPSO that would serve the Itapu project will be canceled.

With the FPSO no longer planned for the Tupi field, the Tupi partners have, according to Petrobras, agreed to prepare a new development plan for Tupi, to be delivered to the national oil and gas regulator ANP in 2021.

"This initiative seeks to implement complementary production development projects resilient to low oil prices, allowing to further increase the recovery factor of the field, which is currently the world's largest producer in deep waters and whose accumulated production has already exceeded 2 billion boe," Petrobras said.