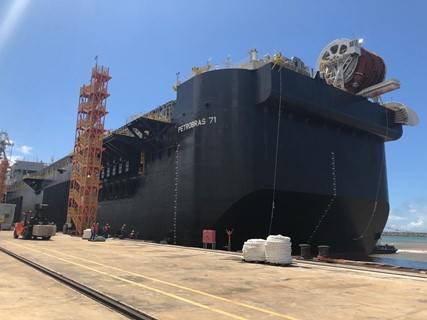 Topside modules are scheduled to be completed and installed on the hull by the second quarter of 2021. Petrobras has yet to decide where exactly it will deploy the vessel.

The P-71, designed to operate and produce oil from Brazil's prolific pre-salt layer. It will have a production capacity of 150 thousand barrels of oil per day and a gas compression of 6 million m³ / day. This is the sixth unit in six replica FPSOs built for Petrobras' pre-salt fields.

Petrobras further said that, due to the coronavirus outbreak, decision was made to tow the FPSO hull without a crew aboard, and there were no crew changes on tugboats that towed the FPSO hull from China.

"The operation followed all the recommendations of the World Health Organization," Petrobras said.

In other Petrobras-related news, Reuters on Wednesday reported, citing "a source with direct knowledge of the matter" that the oil company was evaluating a short-term adjustment to its five-year business plan, over the drop in oil prices and coronavirus outbreak.