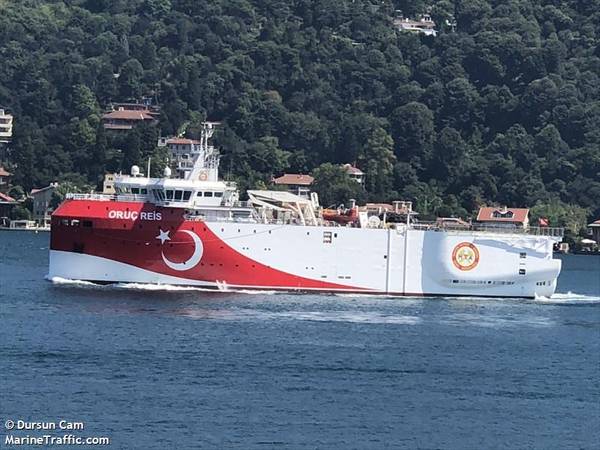 The United States on Tuesday slammed Turkey's renewed push to send a vessel to carry out seismic surveys in the eastern Mediterranean, accusing Ankara of unilaterally stoking tensions and "deliberately" complicating the resumption of talks with Greece.

"The United States deplores Turkey’s October 11 announcement of renewed Turkish survey activity in areas over which Greece asserts jurisdiction in the eastern Mediterranean," State Department spokeswoman Morgan Ortagus said in a statement while urging Ankara to cease its survey activities.

"Coercion, threats, intimidation, and military activity will not resolve tensions in the eastern Mediterranean. We urge Turkey to end this calculated provocation and immediately begin exploratory talks with Greece," she said.

Tensions in the eastern Mediterranean have risen over claims and counterclaims pitting Turkey against Greece and Cyprus to maritime areas thought to be rich in natural gas. Both Turkey and Greece are NATO allies.

Turkish foreign ministry spokesman Hami Aksoy said it was Greece, not Turkey, that was escalating tensions in the Aegean and the Mediterranean Sea.

On Monday, Turkish ship Oruc Reis set sail to carry out seismic surveys in the eastern Mediterranean, prompting Greece to issue a furious new demand for European Union sanctions on Ankara in a row over offshore exploration rights.

Both Germany and France expressed their concern after Oruc Reis began its voyage. Greece's foreign ministry described the move as a "major escalation" and a "direct threat to peace in the region."

The Oruc Reis intends to carry out work south of the Greek island of Kastellorizo, which is close to Turkey's coast.

Last month U.S. Secretary of State Mike Pompeo visited Cyprus and Greece, including the island of Crete in the eastern Mediterranean, as Washington lifted a 33-year arms embargo on Cyprus, deepening its security cooperation with Nicosia. The move prompted an angry response from Turkey at the time.