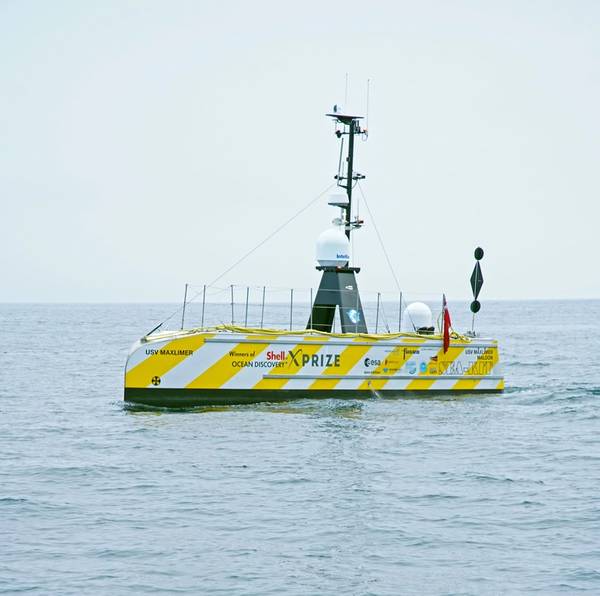 The project has been dubbed a major achievement for the British company for successfully operating an uncrewed vessel over the horizon on a three-week, round-the-clock, remotely-controlled survey in the Atlantic.

The vessel has since late July the USV has mapped over 1000sq km of ocean floor, controlled around-the-clock by SEA-KIT via satellite communications from its Remote Operation Centre in Essex. Notably, SEA-KIT said that the Maxlimer returned to Plymouth with its fuel tank still around a third full.

Earlier this month, Fugro ordered two Sea-Kit USVs, one bound for their Asia-Pacific region and the other for North Sea operations.

Commenting on the successful completion of the USV's remote survey operations campaign, Ivar de Josselin de Jong, Director Remote Inspection at Fugro said: "This proof of concept is exciting and confirms Fugro made the right choice to partner with SEA-KIT to develop a range of USVs that will transform the marine industry.”

Peter Walker, Director of Technology at SEA-KIT, said:"We are on track with our strategy of leading the development of remote and autonomous solutions. It has been a tense but exciting few weeks. The project’s overall aim was to demonstrate the capabilities of current technologies to survey unexplored or inadequately surveyed ocean frontiers and we have absolutely done that."

"It is a ground-breaking achievement to prove true over-the-horizon capability and the team are elated to have successfully pushed the boundaries of our USV design once again.”

Named UTAS (Uncrewed Trans-Atlantic Survey) and co-funded by the UK Space Agency through the European Space Agency’s Business Application program, the project was originally planned to be trans-ocean.

However, due to travel restrictions and other planning complications resulting from COVID-19, this was ultimately not possible, SEA-KIT said.

"The data gathered on this Atlantic voyage will be a valuable addition to the global seabed,” said Jamie McMichael-Phillips, Director of Seabed 2030.

“More importantly, this is another milestone on the journey towards the development of the kind of scalable, environmentally-friendly technology that we are going to need in order to reach our goal of mapping the whole of the world's ocean floors by the end of the decade.”

McMichael-Phillips continued: "What began as a scientific challenge taken on by the talented members of the GEBCO-Nippon Foundation Alumni team became an award-winning technology that has now matured into a viable commercial company. This is exactly the kind of innovative ecosystem that GEBCO and The Nippon Foundation were trying to create when they launched Seabed 2030.”

he Nippon Foundation/GEBCO Alumni through Map the Gaps, with their global distribution, allowed for 24 hour bathymetric surveying as they remotely operated the multibeam and ensured optimized data acquisition.

Travis Hamilton, Product Manager at Teledyne CARIS said: “At Teledyne CARIS, we are inspired by projects that align with our passion for innovation in hydrographic survey. We were pleased to support this project with our automated hydrographic processing solutions CARIS Onboard and CARIS Mira AI that apply workflows designed to remotely support the unique challenges of uncrewed surveys from shore-based stations.”

The proven ability to conduct remote survey operations with USVs has many beneficial applications across the offshore sector. For example, critical tasks such as trans-ocean cable route surveys, needed to meet the increase in demand for data communications, can be completed without risk to personnel and with significant savings on mobilization and operational costs when compared to executing the same task with crewed vessels.

UK Space Agency Chief Executive, Graham Turnock, summed up how USVs are set to redefine offshore operations: “On its 22-day mission the Maxlimer vessel used satellites in the sky to show us what we can do under the sea. Robot boats could radically change the way we work at sea and this project, backed by the UK Space Agency, has given us a unique window into the future potential of satellite-enabled maritime operations.”

Canada: Cenovus Energy to Buy Rival Husky Energy in $2.9B...