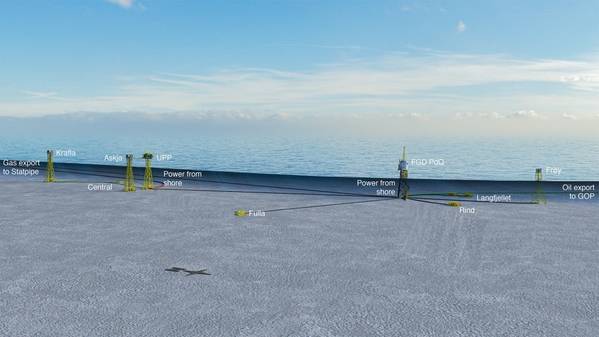 Norwegian oil firm Aker BP and its partners plan to invest more than 50 billion Norwegian crowns ($5.30 billion) in the NOAKA development off Norway, the company's chief executive said on Tuesday.

The NOAKA area located between the Oseberg and Alvheim fields in the North Sea is estimated to hold more than 500 million barrels of oil equivalent and could become the next largest oil and gas development off Norway.

"This would potentially unlock more than 300 million barrels of oil and gas resources for Aker BP, and hence significantly contribute to the company's growth in reserves and production in the years to come," Chief Executive Karl Johnny Hersvik told a quarterly results presentation.

Aker BP and Norway's Equinor said in June they have agreed in principle on a joint development of a number of oil and gas discoveries in the NOAKA area.

The deal was announced shortly after Norway's parliament agreed to a set of temporary tax cuts for the oil industry in a bid to spur investment and save jobs threatened by cost cuts amid the coronavirus pandemic.

The partners, which also include Poland's Lotos Group, aim to approve development plan for NOAKA area, which contains a number of oil and gas discoveries, in 2022, Hersvik said.

Aker BP was also looking at other opportunities for new developments to benefit from the tax incentives, which expire by the end of 2022, he added.